The latest news in the world of video games at Attack of the Fanboy
Updated July 6th, 2017, by Dylan Siegler 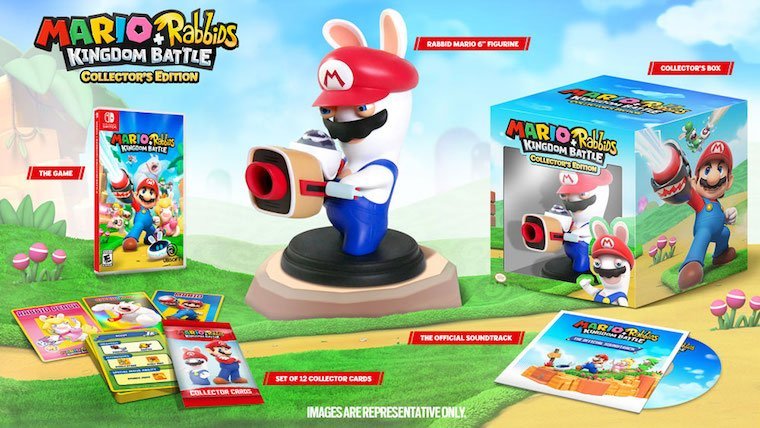 Mario + Rabbids: Kingdom Battle is the Mario and Rabbids crossover RPG that no one wanted going into E3 but that everyone was excited for leaving E3. The game features characters from Nintendo’s iconic Mario series teaming up with Ubisoft’s Rabbids when their two universes collide. Together, Mario, his friends and their Rabbid counterparts use laser guns to take out evil Rabbids in an attempt to save a world created by the meshing of the Mario and Rabbids worlds. The game is coming out later this summer and will have a $100 Collector’s Edition that is exclusively available from GameStop.

The Collector’s Edition, which will be $40 more than the game by itself, includes the game (duh), a six-inch figurine of Rabbid Mario designed by Ubicollectibles, a set of twelve collector’s cards and a physical CD of the game’s soundtrack, which was composed by Grant Kirkhope. Kirkhope is known for composing the soundtracks in such games as Banjo-Kazooie and its sequels, GoldenEye, Viva Piñata and Yooka-Laylee among many others. All of these items come in a compact Collector’s Box.

Pre-orders for the Collector’s Edition are available from GameStop now. Mario + Rabbids: Kingdom Battle will be out on August 29 and will be a Nintendo Switch exclusive.