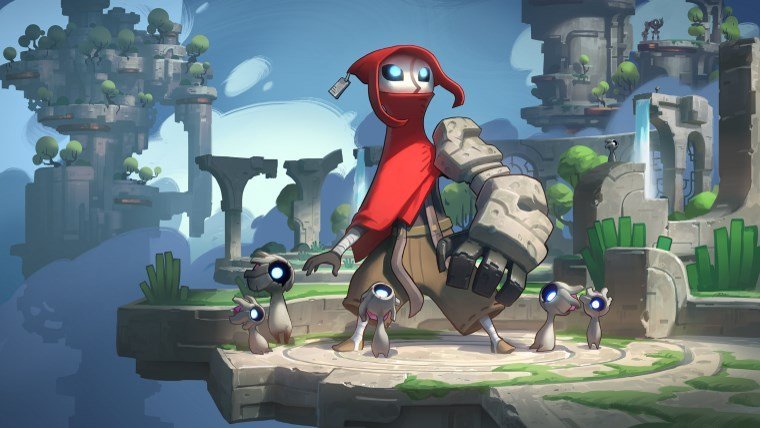 Hob is a game that is in limbo. It is made up of the best parts of some of the greatest games of all time. Taking inspiration from The Legend of Zelda, Journey, and a number of other exploration based games, Hob feels like it could be another fantastic game within this genre. At the same time, Hob does some things new, and it is bold in its defiance of genre norms and conventions. With all of this put into a single package, there was a huge chance that developer Runic Games could screw the whole thing up. They haven’t, but the finished product definitely fails in a few key areas, causing it to fall well short of where it could have ended up.

The story of Hob is likely held somewhere deep within the confines of the Runic Games offices. The entire game has no dialogue in it, with even the player interface mostly being devoid of informative text. Instead, the game simply places players into its world and sees what happens. What players will find is a clockwork style machanical world that has been broken and corrupted by some nefarious invaders. Exploring that world players will discover power ups for themselves, as well as other small story pieces that can be put together within the player’s head. 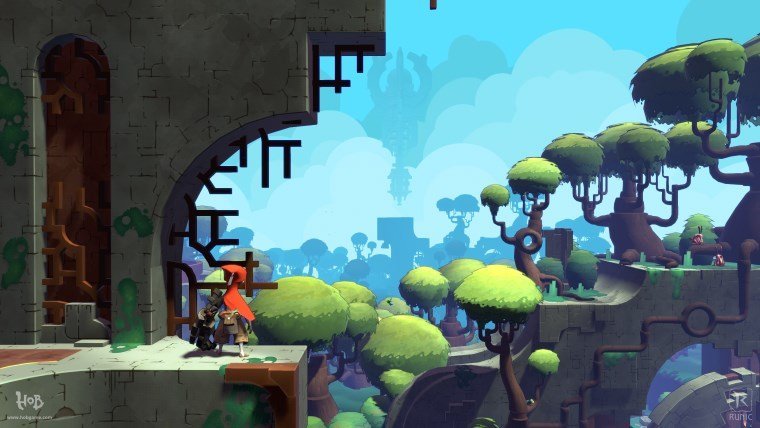 There’s little purpose to what you will do in Hob, aside from the one you define for yourself. This isn’t an open world game in any major way, instead acting more like a Metroidvania title where the map slowly unfolds before you as you unlock it. Also, there is a defined path to take, unlocking certain sections by completing specific tasks. Still, Hob doesn’t direct you to these things in a conventional sense. Instead it pops you out into the broken world and then counts on you to want to fix it.

This is marred a bit by a single objective marker that will appear on the map, almost inexplicably. This middle-of-the-road approach to an open platform does diminish the impact quite a bit. It’d be one thing if I was intentionally lost in this world, left to fumble and meander about by my own devices and intentions. But Hob does offer you direction, it’s just not a very clear one. Early on I had an objective marker far across the map, in an unexplored area. Travelling toward that location took me on a puzzle solving adventure that lasted over an hour, the end result being that I’d restored power and order to some areas, and was then offered a new marker to follow.

There’s a challenge to designing something like this that Hob both succeeds and fails at, at different times. When you do spot what’s wrong with the world and set out to fix it, doing so can deliver a fantastic sense of accomplishment. Other times though you’ll simply be flipping switches, hitting buttons, climbing and jumping across the landscape, and then something cool will trigger and you’ll think “oh, so that’s what I was doing.” How much you enjoy Hob will depend a lot on how often you experience the former, compared to the latter.

Outside of the puzzles, Hob excels a bit more consistently. Combat is fast, fluid, and fun, offering combos that work on the fly. Players are able to upgrade a lot of their abilities, though they’ll do so in the same cryptic manner as almost everything else in the game. Upgrades and new moves can be found or purchased using currency earned around the map, or by defeating enemies. Players will have to head back to their base to perform the operations, but there’s a decent, but limited transport system available to decrease the travel time. 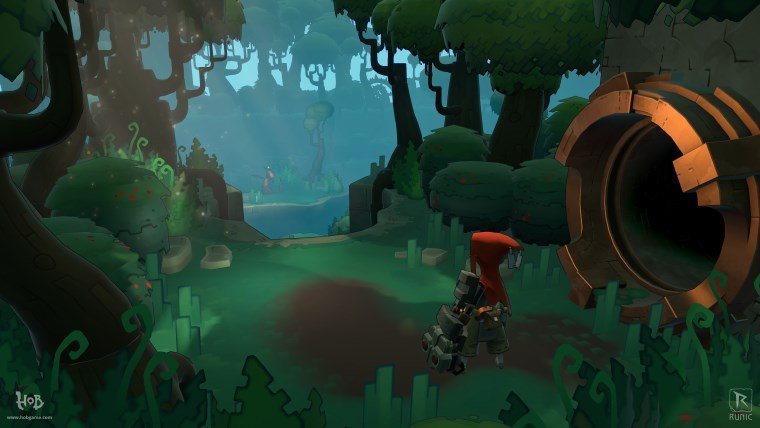 The gameplay of Hob is solid on paper, but there are some more factors that serve to dampen the enjoyment. I’ve already mentioned many, such as the overall lack of focus and purpose behind the player’s actions, but one was extremely detrimental. On the regular PS4 Hob simply doesn’t run well. I’ve seen better reports about the PC version, and the extra power of the PS4 Pro seems to help, but on my original PS4 the game chugged along at a sub-optimal FPS through most of the game. Anything outside of a calm, placid environment would send the framerate careening downward, making for a sluggish and choppy experience all around.

There were also some glitches outside of the graphics, which overall were quite stylish and enjoyable thanks to the colorful art. At one point I wasted an hour trying to work out the solution to a puzzle. It seemed so clear and obvious, yet my actions weren’t having the desired effect. The next day (and to note, this was all after the game had launched) I loaded the game up and it worked as I’d expected the whole time. There was apparently a bug and an update had fixed it. This is great, of course, but it left me wondering how many other game breaking glitches made it through to the final release.

But thankfully I didn’t encounter any other larger bugs, but some minor things were bothersome. There’s an odd camera hitch whenever the main character changes direction. This is so small that many players won’t notice, but I did and it really did become annoying later in the game. Ladders are featured quite frequently throughout the world of Hob, and unfortunately they are very poorly designed. It seems like your character will often not do what you want with them, latching on when you want to pass by, climbing down when you mean to climb up, and so on. They aren’t broken or anything, as they work more often than they don’t, but they could have been put together more seamlessly, or just eliminated with some different mode of travel. 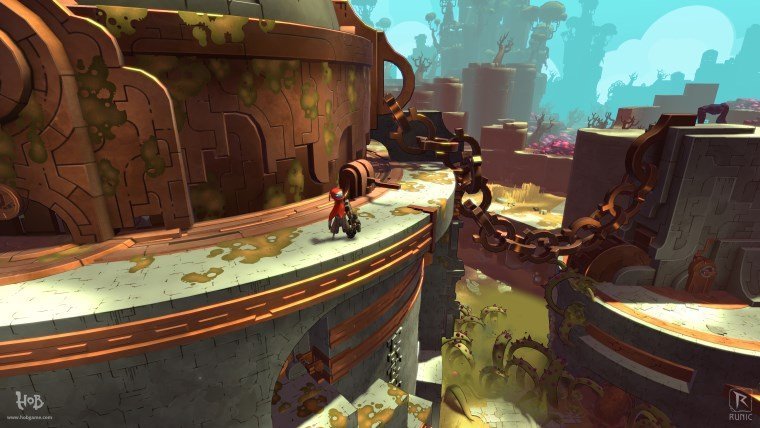 With all of these criticisms you might think that I hate Hob, which is not true at all. The game looks great, with a unique art style that might not be everyone’s favorite, but will do wonders for those seeking something different. The soundscape is gorgeous, with music that chimes in only when necessary to elicit the proper mood for the scene, and environmental noise that puts you right within the world. Despite the frustrations that I’ve laid out above I kept finding myself drawn back into Hob and its world.

Hob is a game that feels like it could be much more than it is. It’s a game that draws inspiration from the best in the business. It’s a game that looks and sounds great. And it’s a game that offers something unique for players. Yet it falls short of the heights that it could have reached due to a few key failings. Performance is poor, some bugs made it into the finished product, and if you don’t find purpose in silence then you’ll feel rather lost. But for those who can look past, or not even notice these things, Hob will deliver an enjoyable puzzle-platforming adventure that will stick with you beyond the end credits.

How Old Is Tilly Green in Big City Greens?
Posting....