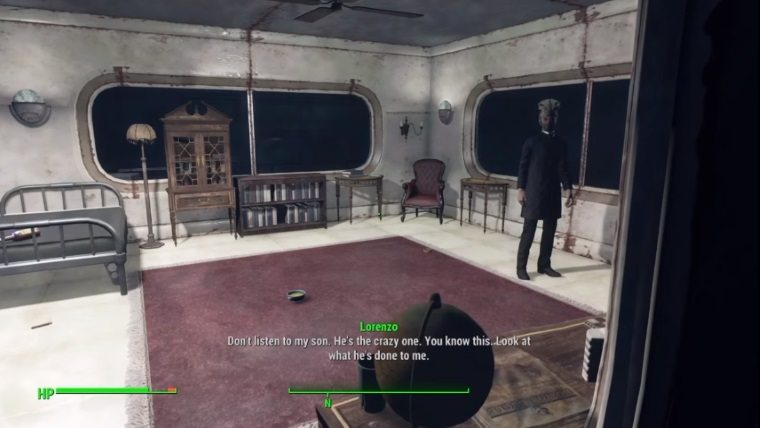 Fallout 4 is full of tons of interesting side quests and adventures. It also has a few moments where the morality of your actions really comes into question. These two elements combine in the excellent mission “The Cabot House”. This multi-part side quest culminates in a truly difficult decision for the player, which can have a bit of a lasting impact on their Fallout 4 experience. Rather than walk through every step of The Cabot House mission, this guide will focus on just the end of it, which is really the only difficult and morally grey part. So, with full spoiler warning in place, here’s all the info to help you decide whether to kill or free Lorenzo in The Cabot House mission of Fallout 4.

After storming the Parsons State Insane Asylum, killing dozens of Raiders and reaching the basement, the player will be face-to-face with Lorenzo Cabot. The patriarch of the Cabot family has been imprisoned in this cell for over 400 years, with an alien artifact keeping him alive and supplying his children with a “Mysterious Serum” that has kept them alive. You now are faced with a choice though, do you trust Jack Cabot and kill his father, or do you set him free?

The consequences of each action are felt throughout Fallout 4. Morally you’ll have some trouble either way. It’s obvious that keeping Lorenzo locked up is wrong, but was there any other choice? Killing him will likely cause trouble with any companion you have with you, but the actions after might be far worse. Let’s break down exactly what happens with each choice.

If you kill Lorenzo, which you do by flipping the four switches on the walls, you head back to Cabot House with Jack where he give you about 500 caps. If you were kind to him throughout the mission, he will tell you to come back in a week. You can use sleep and wait to make the time pass faster if you need to, or just keep playing and let the week pass by. The mission will update once it has, so you’ll know when to head back.

Once there Jack will give you Lorenzo’s Artifact Gun, which is a Gamma Gun with a special modification. This gun does a decent amount of damage, but its true value is in the various effects of the modification. It can stagger enemies and will deal damage in different ways depending on certain factors. Overall there are better weapons out there, but it could be useful in a few situations.

Now, if you decide to free Lorenzo the mission becomes a whole other affair. Lorenzo will then ask if you wish to help him kill his family. Again, be careful what companion you have here as there’s a lot of morally grey actions going on. Whatever you tell Lorenzo here isn’t totally important, just head back to Cabot House for the rest of the mission.

Once there you are presented with the opportunity to switch allegiances once again. If you side with Jack and the rest of the Cabot family you’ll have a very tough fight against Lorenzo (use the Mysterious Serum you found at the asylum to make it much easier). At the end you’ll get the caps, but not the gun.

If you stick with Lorenzo you’ll assist in killing the Cabot family, which should be pretty easy, especially if you convince Edward to join your side. Once it’s over Lorenzo will give you about 500 caps and explain the new deal. At any time you can swing by the Cabot House to grab more Mysterious Serum. You can only ever have one vial at a time, which cannot be traded or sold. Once it’s used just head back and grab some more.

This serum gives you a huge Strength boost, as well as a ton of damage resistance and rad resistance. It could be pretty useful out in the wasteland of Fallout 4, so if you are willing to slaughter a not so innocent family this could be the best option. Just have Piper or Curie head to one of your settlements before the fighting begins.