Halo 5 Guide: How to Get REQ Packs and REQ Points 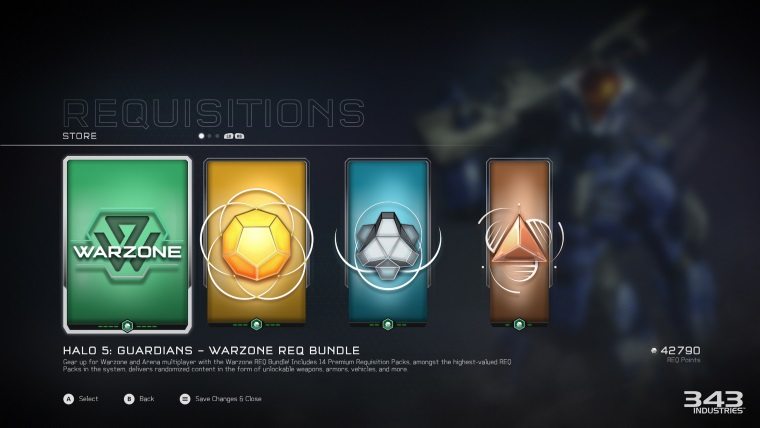 Halo 5: Guardians is full of unlockable items, but you’ll have to master the art of REQ Packs if you want to get them all. REQ Packs are Halo 5’s randomized unlock system, as well as the way you get weapons and vehicles for use in Warzone. This means players will want to get these things as quickly and efficiently as possible, so here’s some tips for how to get the most REQ Packs, and the most out of them, for your time in the game.

REQ Packs come in a wide variety, with some dropping randomly, others hitting you for special events in multiplayer, and the rest being purchased. Of course, if you want to throw your hard earned money at the game, then you can gobble up all the REQ Packs you want, but most will earn plenty of REQ Points just by playing.

The more you play, the more you earn. There isn’t really a more efficient way of earning REQ Points, so just play what you want to play and you’ll gain them as fast as you can. The real questions is, what do you spend the point on once you have them.

The REQ Store has three packs available for purchase, Bronze, Silver, and Gold. Bronze is fairly useless, offering only common items for use in Warzone, unless you get really lucky. You’ll most likely want to focus on Silver and Gold REQ Packs, depending on which mode you’re stocking up for.

You see, both Silver and Gold REQ Packs offer the same amount of unlockable items, two. If you still have things left to be unlocked permanently, such as a weapon for a loadout, or a cosmetic item for Arena, then two of them will be unlocked randomly, whether you buy a Silver or a Gold REQ Pack. So, if all you want is to unlock the cosmetic items for Arena, then you’ll want to spam Silver REQ Packs as fast as possible.

If, however, you want to get the best weapons and vehicles for Halo 5’s Warzone, then Gold is the way to go. This is because the Gold REQ Packs offer up better items than Silver, with some being in the Legendary category of rarity. It’ll be costly, with Gold REQ Packs costing double what Silver do, but it will be worth it in the long run, if Warzone is your preferred gamemode.

The non-purchasable REQ Packs are a bit different. These are handed out for promotions, commendations, and other random events. To try to get these you want to shoot for the most XP, utilizing the XP boosts you earn from other REQ Packs effectively. You’ll also want to shoot for some Commendations, which are handed out for different tasks, such as pulling off headshots, or killing people with certain weapons. If you find that you aren’t getting Commendation Packs that often, you may want to use a different weapon, as that will earn Commendations quicker. Of course, maxing out your Commendations for certain weapons will earn better Packs, so it’s worth using the standards until that happens.

Master all of these tricks and you should be swimming in unlockables and powerful weapons for Halo 5 Warzone. Let us know if you have any questions or comments in the section below.

Home / Game Guides / Halo 5 Guide: How to Get REQ Packs and REQ Points