Most Anticipated Games of 2014 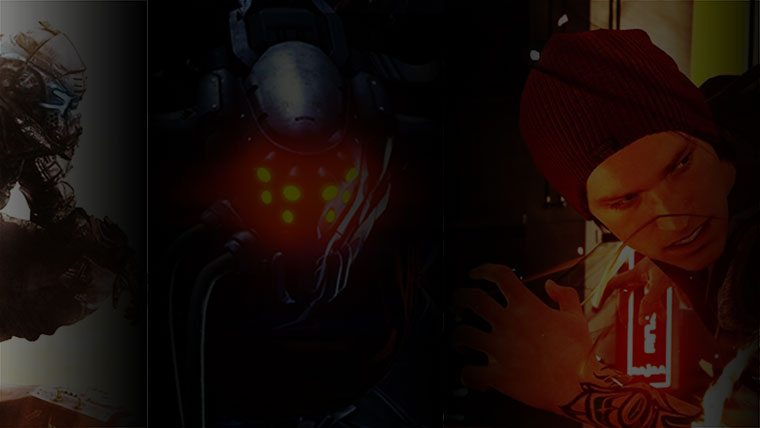 In retrospect, 2013 has been a pretty great year for games. Consoles from Sony and Microsoft have been released, PC gaming is healthier than ever, and major publishers have announced some interesting new game franchises to kick off the generation. That said, 2014 should be a great one, with a lot to look forward to. It’s going to be a year full of big releases, if we don’t see any major delays. While it was definitely difficult to whittle it down, here’s our top ten most anticipated games of 2014 (in no particular order).

Most Anticipated Games of 2014

Respawn Entertainment’s next-gen shooter captured the interest of many gamers when the game was revealed at E3 2013. The combination of fast-paced shooting action and giant robots is something that’s got many excited. Factor in the variable that Respawn Entertainment is comprised of some of the minds behind Call of Duty: Modern Warfare, and there’s definitely reason to get excited.

Can they turn the shooter genre on its ear once again? We’ll have to wait until early-2014 to find out.

Bungie made Halo, one of the biggest shooter franchises the gaming industry has ever seen. Is that reason enough for their next game to be on our list for most anticipated of 2014? I think so.

Due out in the fall of 2014, Destiny is a game that we still don’t know much about. We know there’s a heavy cooperative and MMO-type element to the game. We know there’s a persistent, connected world that centers around the player’s created character. But we’ve also heard rumblings about a players vs. player competitive mode that could round out an impressive package of content from Bungie.

Expect to hear a lot more about Destiny as 2014 starts to roll.

InFamous Second Son catapulted to the top of many PlayStation fan’s wishlists when it was announced last February. Sucker Punch is clearly harnessing the power of the PlayStation 4 with some of the best visuals we’ve ever seen from a console title.

If the launch lineup of the PlayStation 4 has you holding off on purchasing the new console, Infamous Second Son’s spring release will probably have you rethinking that stance.

Sucker Punch hasn’t shared many details about what to expect from the gameplay behind Second Son, but as the holidays wind down and the marketing machine picks back up, expect more details soon.

Watch Dogs is one of our most anticipated games for a couple of reasons. It’s been on my radar for 18 months now, ever since I saw and was impressed by its E3 demo in 2012 I’ve wanted it. Secondly, it’s so high on my list because it’s been delayed. It was to be the crown jewel of my Next Gen Day One lineup, but instead I have to wait another 4 months.

I can’t think of a successful combination of Third Person Shooter and MMORPG, certainly not on consoles. The Division promises this and much more. Everything from the extreme detail in the  environment and weather changes, to the diverse levelling and customisation system grips me and leaves me wanting more. Massive’s E3 demo was a thing of beauty, and The Division is firmly at the top of my anticipated list because of it.

This is the enigma of the list. It looks as though it has the potential to be a truly brilliant game. Though slightly simplistic in graphical design, it still looks professional, and the depth of it is astounding. So because so little is known about it, plus the fact that it’s being built by a 4 man team, roots No Man’s Sky firmly in my most anticipated list.

Halo 5 could very well be released in the same month as Bungie’s new game, and for that reason alone, it’s going to be an interesting story/game to watch.

Though with just how great Halo 4 looked on the Xbox 360, there are plenty of reasons to be excited for a better looking version of Halo. Furthermore, this will be 343 Industries’ second attempt at the Halo franchise, and after getting their feet wet with the last game, Halo 5 should right any wrongs for the series.

Halo 5 is slated for a 2014 release, but Microsoft and 343 Industries have been awfully quiet about the title, after releasing the trailer below at their E3 2013 Press Conference.

CD Projekt Red and The Witcher series has shown the type of progress we wish we saw in all games. The developers seem to be getting better and better with each iteration, and The Witcher 3: Wild Hunt looks like their best work yet.

The mature themes and branching storyline in The Witcher series, coupled with the better visuals, bigger game world, and refined gameplay make The Witcher 3: Wild Hunt one that’s definitely got us chomping at the bit to hear more about Geralt of Rivia’s next adventure.

Prologue or not, Kojima set the bar really high with Metal Gear Solid IV on the PlayStation 3. Always the innovator we’re interested in seeing where the legendary games creator, Hideo Kojima, takes the series both in terms of increasingly complex storyline and gameplay with the additional power underneath the hoods of the Xbox One and PS4.

If there’s one reason to hold on to your PlayStation 3 or Xbox 360, it’s the return of From Software’s Dark Souls in 2014. The devilishly hard action-RPG will make its return in 2014, with Dark Souls 2.

Spawning from the PlayStation 3 exclusive, Demon’s Souls, Dark Souls won over many with it’s hard as nails, trial and error gameplay when it launched on the Xbox 360 and PlayStation 3.

From what we’ve seen and played, Dark Souls 2 will not be making things any easier on the player. Dark Souls 2 is slated for an early 2014 release on the Xbox 360, PlayStation 3, and PC.

Our Most Anticipated Games that probably won’t arrive in 2014

Bethesda’s next RGP probably won’t arrive in 2014. Considering that the Skyrim publisher hasn’t spoken a word about Fallout 4, it would be a long shot to see the game arrive next year for next-gen consoles.

Right now, Fallout 4 is a pure common sense and speculatory rumor from the internet. There have only been vague hints that the game even existed, until a document was recently released that confirmed work on the game.

But still, Bethesda is probably playing it safe and waiting for more next-gen consoles to hit the market before releasing the next iteration of one of their biggest franchises.

Naughty Dog has another Uncharted game in the works. They recently showed off a teaser trailer that confirmed the great news. The bad news, it’s probably not coming in 2014.

While it’s entirely possible that Sony ramps up the marketing following a full E3 reveal for the game, they’ll really be cutting it close it terms of getting the word out there on one of their biggest titles.

Anytime Naughty Dog says they’ve got another game on the way, it’s time to get excited. There last four games have been pure gold, with the Uncharted series garnering an incredible amount of praise from critics and fans alike. 2013’s The Last of Us is at the very top of many best-of lists for the year.

Even in the best case scenario, Red Dead Redemption 2 won’t likely be announced in 2014. Which means we definitely won’t be seeing Red Dead Redemption 2 on consoles next year. It still makes a lot of sense for Rockstar to continue with the series though. It was one of the most popular games released on the Xbox 360 and PlayStation 3, winning numerous game of the year awards in 2010. Once Microsoft and Sony saturate demand with more hardware, it’s probably a smart bet to assume that Take Two will pursue a new game in the series.

The good news is that Take Two has already come out and addressed that there will be another Red Dead game, it’s just a matter of when. Earlier this year, CEO Strauss Zelnick told investors that Redd Dead Redemption is a key pillar to the company’s long term game plan.

The future of the Gears of War series is very much unknown at this point. The major players in the series’ development have left Epic Games, and moved on to other video game projects.  Sure, there’s still People Can Fly, and they are the team responsible for Gears of War: Judgment, but there’s been no mention of a new Gears of War game coming from Epic anytime soon.   Could help garner in the Xbox One?  Absolutely, Gears of War was one of the company’s biggest and best selling games for the Xbox 360.

As it stands though, it’s only a pipe dream.  Microsoft’s either going to have to shell out some serious cash to get another game out of Epic, or find a new third person shooter to fill the void.   Either way, it likely isn’ t going to arrive this year.