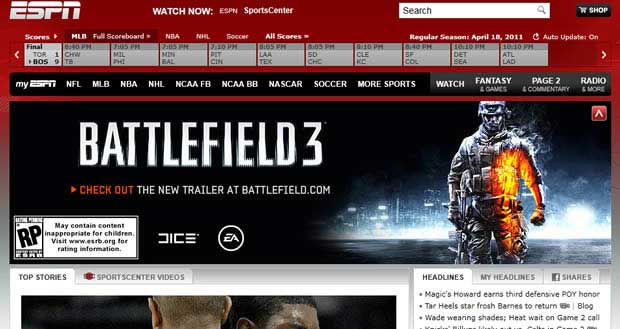 The viral marketing campaign for Battlefield 3 has already begun.  Aside from the trailers and gameplay footage that has trickled out of DICE since the game was officially announced earlier this year, a new stage of marketing for the game has begun.  So far, DICE has begun to rollout banner advertisments with some of the biggest sites on the internet like GameSpot, Game Trailers, IGN, and ESPN.com.

Traditionally this seems like it would be a bit early, but it looks like EA is going to spend that $100 Million dollars that they’ve marked for advertising the game in such a way that they’ll keep the game in the minds of gamers all the way up until its launch in November.  So don’t be surprised if you see the game on your television during big upcoming televised events like the NBA or NHL Playoffs as well.

Will it pay off?  I guess we’ll have to wait until November to see the result of this early marketing blitz.