Bioshock Heads to iPhone and iPad 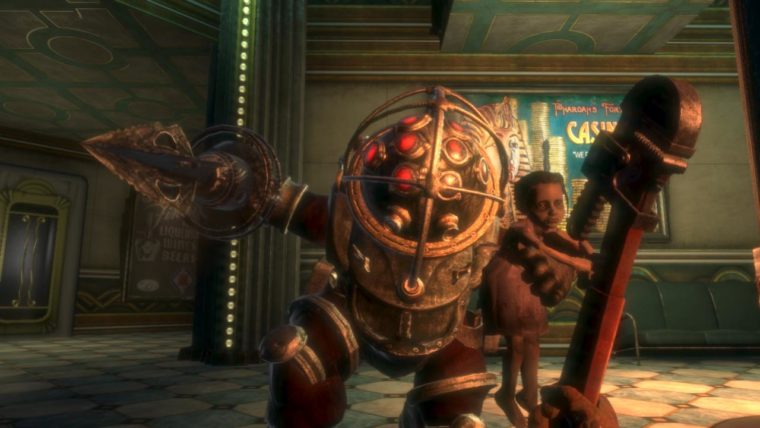 After teasing fans with upcoming Bioshock related news, 2K games has announced that Bioshock will be hitting iPhone and iPad devices later this summer. This will not be some dumbed-down mobile game either, it is the full experience from the 2007 first-person shooter classic, just on your iOS device. Of course, some things had to be changed to fit onto the platform, such as graphical fidelity and controls, but otherwise you will still face off against Splicers and Big Daddies just like you did with the original.

In a video on IGN the developer walked through the game on an iPad Air. It will be using the same virtual thumbsticks control scheme seen in other touch-screen enabled first-person games. Wherever you touch on the screen becomes the analog stick to control movement and viewpoint. In order to compensate for the lowered precision of this control scheme extra aim assist has been added to the game. However, if you are not a fan of touch-screen controls you will be able to use bluetooth controllers instead.

Other sacrifices of course had to be made, such as textures and particle effects. It still looks great for an iOS game, and the atmosphere and design of Bioshock still shine through. It also seems like the game will only run in 4×3 aspect ration, instead of the 16×9 that was eventually enabled on PC and consoles.

2K was very vague in regards to pricing and release date, but based on the comments made it seems like it will be released later this Summer for a price of $10-$20. They were adamant that there would be no micro-transactions or in-app purchases. Pay the full price and you get the full game, without worrying about being asked for more later.

Bioshock will be compatible with 4th generation iPads, the iPhone 5 and above. There are no current plans to port the game to Android devices.