Buckingham Palace gets a makeover in latest ZombiU trailer

The latest news in the world of video games at Attack of the Fanboy
August 31st, 2012 by William Schwartz 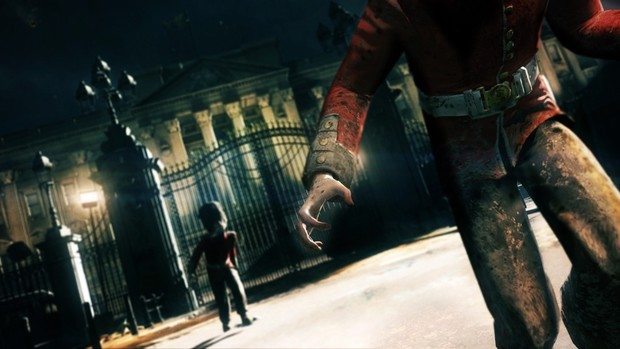 The Queen’s Guard is already a scary-enough concept if you have an indescribable fear of tall, fuzzy hats and exuberant red coats. Add to them the desire to rip and eat human flesh, and you’re talking about a whole new monster, and they’re set to appear in the Wii U’s upcoming ZombiU.

The latest gameplay demo for ZombiU gives you a glimpse of what it’d be like if Buckingham Palace’s ornery royals and nobles were replaced with lethal zombies. The demo showcases the ability of players in ZombiU to utilize the Wii U GamePad to survey surroundings and uncover areas you may not find otherwise, and it’ll also add a degree of tension and intensity when trying to unlock a door while a pack of ravaging zombies close in on your position.

If the 1:33 mark is any indication, ZombiU could very well provide the gore and brutality that zombie-apocalypse fans have been waiting years to play.