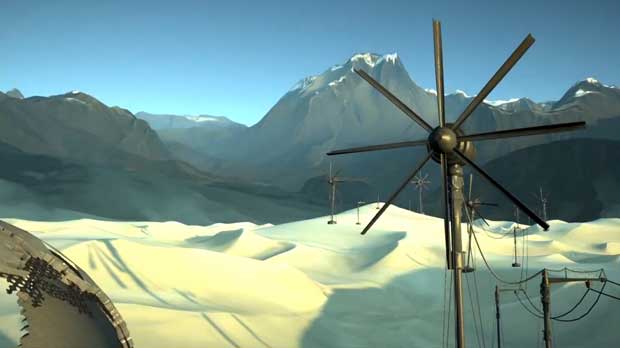 Bungie said farewell to the Halo franchise today in an hour long opus to the trials and tribulations that the company went through developing the Halo franchise.  In that video (which can be seen here), they also gave us a small teaser about what to expect from the company going forward.  Starting from scratch, the developer is building a universe ‘where anything can happen’ as they described, but fans are still waiting for concrete details on what this game will ultimately end up being.

Up to this point, nobody outside the halls of Bungie knows what the developer is cooking up in the Washington based laboratories.  The farewell video did drop a few hints, but again, nothing concrete.  If you forward towards the end of the video, where Bungie is discussing the future of the company, the video begins to show imagery that fans won’t find to be familiar from any of Bungie’s previous titles.  The image above was one of the striking images that immediately stuck out as the onscreen narration moved towards the future, and the discussion turned to talking about new worlds.

This new world that Bungie references could be coming back to the rumors which surfaced months ago about the company developing a MMOFPS, which at the time had been codenamed: Destiny.  In the video, Destiny is never referenced.  Instead, the developers continually reference “Tiger” instead.  Jason Jones directly talks about  “reaching players in a way we haven’t before”.  To close out the video, an image is also displayed that is pointing to a possible logo for the new franchise (below).

No groundbreaking news was delivered as Bungie is waiting for the right time to drop this massive reveal on the world.  When that reveal will take place is still anyone’s guess.  If you haven’t had a chance to watch the video and want to learn all about the guys and girls responsible for one of the biggest franchises in gaming history, clear out about an hour, pop some popcorn, and go here.