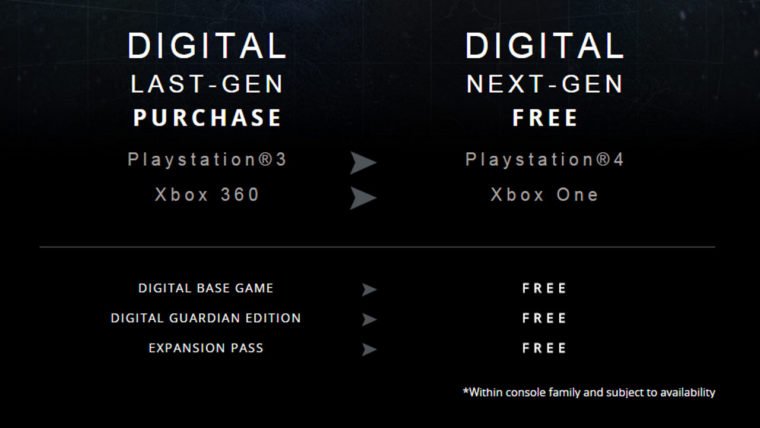 If you are looking to buy Destiny on either of the last generation systems, PS3 and Xbox 360, then you just got some great news. Bungie has announced that for a limited time any downloadable content purchased for Destiny on last-gen systems will automatically get you the same content for PS4 or Xbox One. “For our fans who will be entering the Destiny universe first on PlayStation 3 or Xbox 360 we have some great news! For a limited time, whenever you buy a digital copy of Destiny, you will be able to download the next-gen version within the same console family for FREE.”

To be specific, the three things that this deal includes are the Destiny Digital Base Game, Digital Guardian Edition, and the Expansion Pass. If you buy any of those three things on PS3 or Xbox 360 then you will automatically be able to get the same content for PS4 or Xbox One. And you don’t need to worry about your characters or story progress, those all cross over to the new systems as well as long as you stay within the same console family.

Just remember that this offer is only for a limited time. All content must be purchased and/or redeemed by January 15th 2015 to be eligible. Considering the game comes out on September 9th 2014 that gives you a lot of time to take advantage.

A quick “how-to” was offered in the FAQ section on the announcement page. I combined the Playstation and Xbox versions so just keep in mind that you have to stick within the same console family:

When you buy/redeem the Destiny Digital Base Game or Expansion Pass for PS3/Xbox 360 on or before January 15th, 2015, you can download the PS4/Xbox One copy from the Playstation/Xbox Store for free by doing the following:

– Log into your PS4/Xbox One using the same Sony/Microsoft Account used to buy/redeem the Destiny Digital Base Game or Expansion Pass on PS3/Xbox 360.
– Navigate to the digital content’s location in the Playstation/Xbox Store.
– Add the item to your download queue and wait for the download to complete.

Expansion Pass content (which includes Expansions I and II) will only be available for full download once released.

This is definitely a great deal and will help a lot of people who would have been stuck on the older hardware had Bungie not offered it. However, it does bring up an interesting question. Why not offer the reverse for new-generation owners? If I buy the game on PS4, why don’t I also receive a PS3 copy for free? It seems to make the older generation versions of the game more enticing for gamers if they plan to purchase digitally.