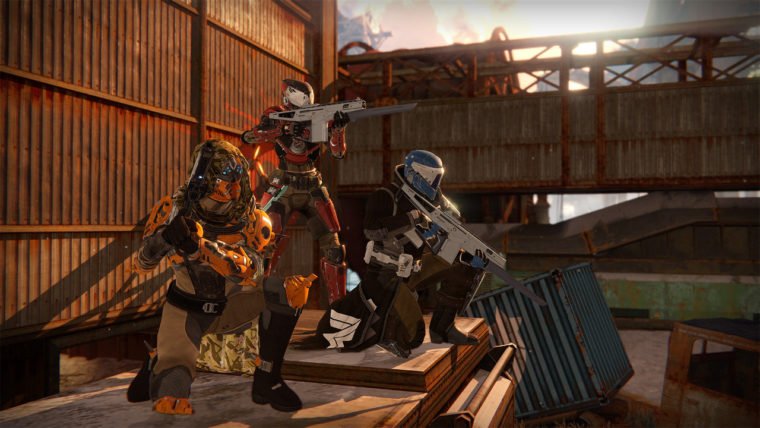 Bungie and Sony previously showed off all of the exclusive content coming to the Playstation versions of Destiny, but today we get a more in-depth look at the competitive multiplayer map Exodus Blue. This map will be exclusive to the PS3 and PS4 versions of Destiny until at least Fall 2015. It, along with the cooperative mission Dust Palace make up the bulk of the Playstation exclusive content coming to Destiny. The rest is special gear and weapons, such as the Monte Carlo Exotic Auto Rifle.

Exodus Blue looks to be an Earth-based map, with rusted out old buildings and machinery dominating the landscape. The official description reads “Welcome to Exodus Blue, Guardians, a mid-sized competitive map set in the shadow of a Golden Age colony ship. We walk you through the ins, outs, and beautiful backdrops of this map which is exclusive to PlayStation until Fall 2015.”

Exodus Blue seems to follow standard Bungie design philosophy, allowing for multiple gametypes to be played on the same map. The video mentions that the map supports five different modes: Skirmish, Control, Salvage, Clash, and Rumble. The video goes on to give a few tips and tricks for Destiny as a whole and the Exodus Blue map itself.

If you’re really interested in the Playstation exclusive Destiny content then be sure to check out our article detailing it all. Also, pay close attention during the video as the players are all using the exclusive content during the match. To get all of these items you just need to have the PS3 or PS4 version of Destiny. Xbox 360 and Xbox One owners will have to wait until at least Fall 2015 for the map to appear on their consoles.