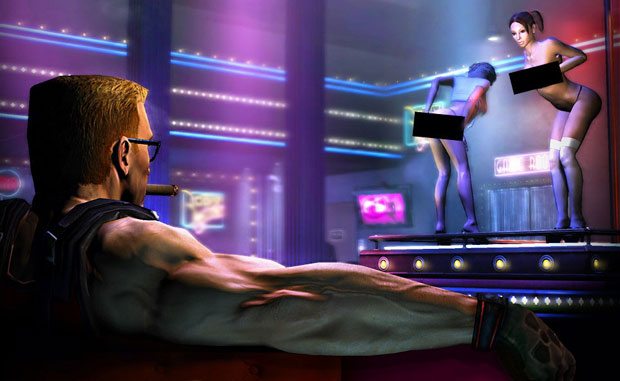 If there was any doubt that Duke Nukem Forever was going to get M rating from the ESRB you can’t put those doubts to rest.  Not only is the game going to receive the coveted M rating, it’s going to be emblazoned with flames and animated eagles due to Blood & Gore, Intense Violence, Mature Humor, Nudity, Strong Language, Strong Sexual Content, and the Use of Drugs and Alcohol, so pretty much everything the ESRB was designed to protect against.  So if you are under 17 or are the parent of someone under the age of 17 you might want to think long and hard before exposing them to the mature themes of Duke Nukem Forever.

Here’s a few of the highlights from the recently released ESRB report.

“A couple of missions within this level require players to recover sex toys and pictures of topless women.”

“Some sequences depict more ‘over-the-top’ instances of violence like a human soldier bursting into bloody gibs after being tossed through propeller blades.”

“During the course of the game, players enter a strip-club level and view several topless dancers and receive lap dances.”

“The game also contains several sexual references and innuendo in the dialogue (e.g., ‘I have hungry—you have big egg ro’ for me, Duke,’ ‘If you supply the dancing, I’ll supply the pole,’ and ‘I’ll need something naughty to play with.’).”

“Bathroom humor includes the ability to urinate in toilets or urinals and/or pick up feces from toilets and throw it against walls.”