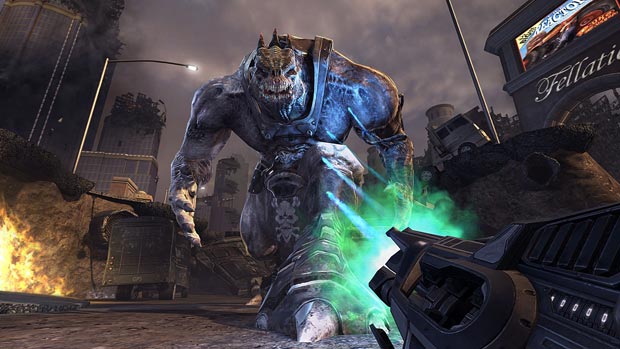 Duke Nukem took Las Vegas by storm recently where journalists where invited to test drive Duke Nukem Forever for the first time.  Originally unveiled at PAX Prime in 2010, this marks the first event where the game has been shown to a large group since.  2K decked out a strip club with a bunch of monitors for the exlusive group to get hands on with the upcoming “Return of the King”.

Sadly, we just aren’t big enough to give you impressions of the game, because we weren’t invited to attend.  But what we can do is make up for it by offering these screenshots below which have been newly born to the internet.  Expect a video coming from the event in the near future as well.  Of the many previews I have read this morning I think 1up categorized it best when they said

In Duke Nukem Forever’s first couple of hours, I take a piss in a urinal, turn on a bunch of showers, flush some toilets, spin some chairs, autograph a book, lift weights, curl some dumbbells, bench press some bigger weights, punch a speedbag, cook some microwave popcorn, play some pinball, drive an RC car, and shoot some aliens. While DNF does become a pretty straightforward action game with corridor shooting (with occasional turret firing bits), the amount of simple and mundane actions rivals that of Heavy Rain of all things. I mean, not only am I still surprised to be actually playing Duke Nukem Forever after all these years, I’m surprised to be doing so much random stuff within it.