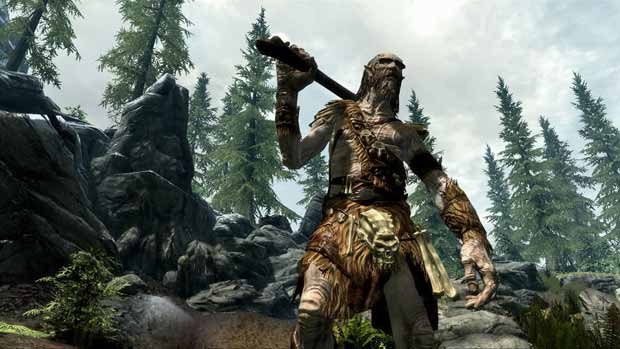 Bethesda’s Todd Howard sat down to discuss the weapons in Elder Scrolls V Skyrim and since he knows we’ve all been waiting with bated breath for clarification on some of the game’s finer points, he also addressed the perk system in the upcoming RPG as well.  While details on Skyrim have been slim, this should hold you until the next information comes available in the near future.

“Each skill has its own perk tree,” Howard said. “So take one handed for instance. The idea is, you have a one-handed skill, and then you can perk that – there’s like a skill tree, underneath one-handed.  Within that there are separate perk areas for maces and then axes and then swords. So opposed to having, say, an axe skill, that is a part of the perk tree within one-handed.  We think that … gives us a better balance. You can start like ‘I like one-handed stuff’ and then you start specializing as you raise that skill.”

“We tend to each time start over, and we want to find weapon types with this game that really yield gameplay, So those skills are separate. There’s a two-handed weapon skill, there’s a one-handed weapon-skill, there’s an archery skill. … Because those really are play styles.”

“Within each of those trees there are different weapon types that you can then get better at. Without saying what they all are, so they actually have a gameplay difference,” “There are not spears in the classic spear sense. I’m sorry, there are currently not.  Something like spears is really cool, it’s just something with where we’re putting our time with the other weapons. It just didn’t make the cut right now.”