The latest news in the world of video games at Attack of the Fanboy
April 26th, 2014 by William Schwartz If you’ve been looking for the armor set featured on the box of Dark Souls 2, you’re going to be searching for awhile. The stylish gear, called the Faraam set, is tucked away near the end of the Dark Souls 2 campaign. First and foremost, to find the Faraam Armor Set you’ll need to have already lit the four primal bonfires. Once you have, you’ll have access to Drangleic Castle. Once you’ve made it to the first bonfire in Drangleic, known as “The Kings Bonfire”, you’ll be very close to the set.

In an adjacent room, there are numerous statues that come to life when you get near them, and a handful of Sentinel enemies. You’ll not only need to clear out this room of enemies, but you’ll need to kill at least a couple of the enemies in proximity to the two large statues at the rear of the room. You’ll know you’re doing it right if the torches in the statue’s hands become lit. 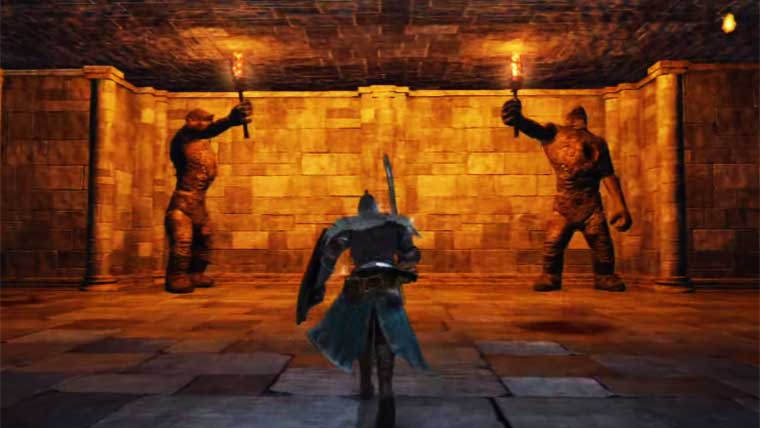 Taking it slow and steady, try to only awaken one statue at time in order to not become overwhelmed. You’ll also notice that the further you progress into the room, Sentinels will attack from the sides.

From the bonfire entry, the door with the Faraam Set is on the left hand side. Once you’ve opened the last door on the left, you’ll find that there’s one more Sentinel to deal with. Once you do, enter the room and stand in the middle to activate a collapsible floor. Dropping down below you’ll find the Faraam Armor Set and a bonfire.