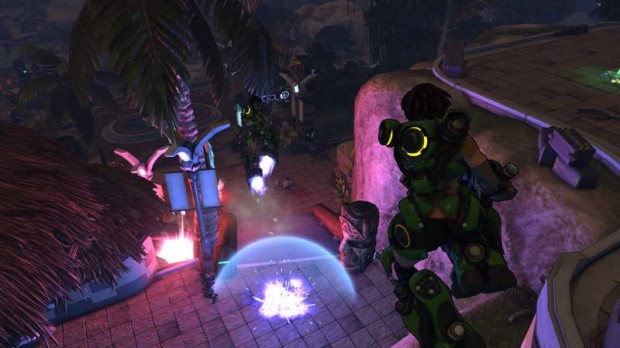 Firefall had a huge presence at this year’s PAX Prime, taking over a half of one hall, the game is apparently a big deal.  Or at least their presence at the convention would have you to believe that.  If you aren’t aware of Firefall, don’t be ashamed, neither was I.  Firefall is PC based free-to-play game that has a pretty decent pedigree.  Mark Kern of World of Warcraft and Scott Youngblood of the Tribes 1 & 2, teamed up to create their dream game by forming Red 5 Studios, and Firefall is the result.

The game is a massive open world shooter which has alot of moving parts.  Having a chance to play through a few modes in the game, I found that you’ll have plenty of combat options available through the games customizable combat system. The system itself revolves around a crafting mechanism within the game via loot collected and earned through said combat.  The open world of Firefall is massive, boasting over 10 square miles of story driven gameplay.  It looks like a premium MMO but with none of the subscription fees that come along with that experience.

The game offers a robust story written by Orson Scott Card in its PvE mode, that is said to expand over multiple years while players complete key objectives.  The gameplay revolves around a world covered by the “Melding Storms”.  These storms spawn “The Chosen”, who players will fight to push back the melding and constantly reveal more of the game.

There’s also a deep PvP mode that advertised to be focused on e-Sports, which features clan based warfare, with options to group and manage your army (clan).  Match sizes can range from a small five versus five, to an obscene 50 on 50 that includes instanced matches and a matchmaking component.

Firefall releases this December, and it will be free to download with no subscription fees.  The free to play model sounds interesting as I was assured that the game is driven through microtransactions that focus on boosts and aesthetics, with a focus on preventing the “paying to win” model that many free to play games follow.

Have a look at some of the screenshots and video from Firefall below.