From the Shadows in Batman: Arkham City 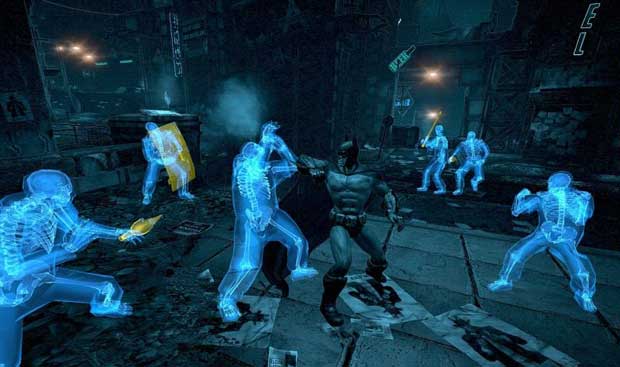 Batman: Arkham City will once again see the Caped Crusader having his most deadly of weapons, stealth.  Batman: Arkham Asylum introduced us to a superhero that stayed true to his comic book roots with both the strength to overcome his foes in the realm of hand to hand combat, but also gave the character a huge advantge with the ability to move through the shadows with grace and finish enemies with power as the silent predator.

According to Arkham City, and from what we’ve seen of the game, this style of gameplay is coming back better than ever this October.  The take-down moves that fans of the franchise will be very familiar with are returning, as well as the weapons in your utility belt that add to your ability to surgically cut through an enemies defenses, plus new additions to the enhance your abilities.

These new abilities should make Batman’s Silent Predator aspects the best yet, and  the Arkham City forums  have compiled a list of what we know so far about what new features will be coming to Batman: Arkham City.

Knock Out Smash – The Knockout Smash allows Batman, with a simple press of X on Xbox 360 or Square on PlayStation 3, to speed up a regular takedown; instead of choking a thug unconscious with his arms, the player can hit a button and Batman will pull the enemy backwards and slam his head into the ground. This new technique gets the job done quicker, but at a cost; using the Knockout Smash will alert all nearby enemies to Batman’s location.

New Silent Take Downs – Thanks to the the new Double Silent Takedown sticking together is no longer a viable option to scare off the Bat, thugs would stick together in pairs when scared in Arkham Asylum; in Arkham City the Dark Knight will reward thugs sense of friendship by viciously smashing their skulls together.

In the new Hanging Takedown Batman can hang off a ledge and take out the person below him. Batman lowers himself down, and quickly wraps his legs around an unassuming thugs neck, lifting him off the ground and choking the air from his lungs.

With the Wall Takedown Batman has decided to forgo the use of gadgetry and simply break through a wall that is made of wood, the move derives from a combination of the Silent Takedown and the Explosive Gel from Arkham Asylum.

Upgraded Detective Vision – The updated Detective Vision can see enemies better than the version demonstrated in Arkham Asylum, it can still see objects of interest and locate weapons; but the trade off is that it can’t see the enviroment as well as the usual vision, to quote co-founder of Rocksteady Sefton Hill “It’s Batman’s hunting tool… it’s not a navigational tool”.

Smoke Bombs – There will be times when Batman gets caught off guard in Batman: Arkham City, and for those times, Rocksteady is providing the player with Smoke Bombs to make a quick getaway if the situation calls for it.  A smoke bomb and a quick grappling hook to safety will likely save you a restart on occassion in Arkham City.

Home / Game News / From the Shadows in Batman: Arkham City