Gamestop Selling PS4, Xbox One And Wii U Pre-Owned Console Bundle For A Cheap Price 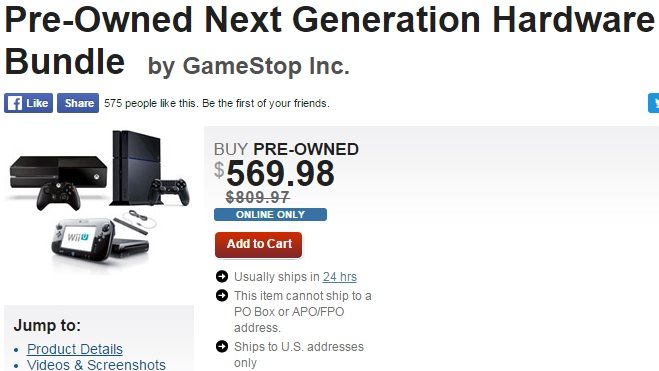 In North America, it’s now Christmas Eve. You may want to visit Gamestop’s website to buy a great pre-owned console bundle that includes a PS4, Xbox One and Wii U.

If you visit Gamestop’s official website, they are selling a special “Pre-Owned Next Generation Hardware Bundle”. This includes a pre-owned PS4, pre-owned Xbox One and a pre-owned Wii U console.

This whole bundle is available for the special price of only $569.98. This offer is only available online and the price is down from the usual $809.97 that it’s set normally.

Even though all systems are pre-owned, they have been refurbished and come with the necessities. You get a 500GB PS4 and Xbox One that comes with one controller each and HDMI cables. The Wii U is the 32GB version that also comes with an HDMI cable and a gamepad controller too.

This might be the best deal you can get if you’re keen on owning all of the new consoles. If you are still yet to upgrade your PS3, Xbox 360 and/or Wii consoles, this deal from Gamestop is a good opportunity to get them for a cheap price.

2016 is set to be the year that more exclusives games will be coming out. Some of the big games coming out includes Uncharted 4: A Thief’s End, Gears of War 4, The Legend of Zelda and more.