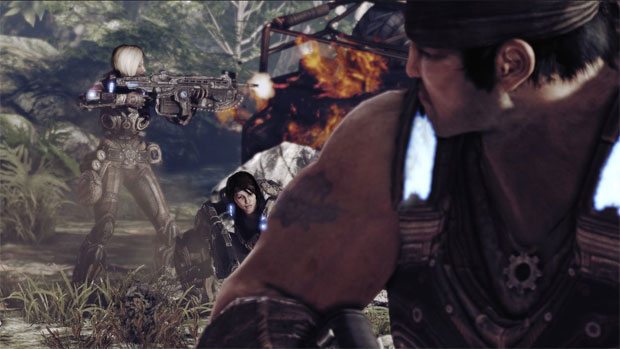 Gears of War 3 will complete the trilogy of one of the most popular franchises in gaming.  A concrete release date was finally announced by Epic Games and Microsoft for one of the most anticipated games of 2011.  September 20th marks the date when Gears of War 3 launches worldwide.  Microsoft, via press release, conveyed the news of the release date.  As well as some juicy details about the campaign, weapons, maps, multiplayer and more.

The story takes place eighteen months after the events of Gears of War 2 and the loss of the human stronghold of Jacinto.  Marcus, Baird, Dom and company continue their fight to save human civilisation, as they battle the Locust and face new threats from within the planet throughout the campaign mode.

Here is what else you can expect from 2011’s most highly anticipated game:

An enthralling cinematic story that captivates players in an intimately intense action game
Five-on-five multiplayer experience as well as four player campaign co-op experience
New multiplayer game modes including ‘Beast Mode’ – offering a new twist to the game where you take on the role of the locust horde and their assorted variations!
New maps including: Trenches which features an impressive sand storm that reduces your visibility, as well as Overpass, Mercy, Checkout, and Thrashball
New weapons including: The Bayonet Charge, The Retro Lancer, The Sawed-off Shotgun, The OneShot – a heavy sniper rifle that shoots through shields or cover for a surprise one shot kill, The Incendiary Grenade, The Digger Launcher and a few subtle tweaks to old favourites Hammerburst and The Classic Lancer. Don’t forget that each weapon now has its own execution move!