Get some Fruit Ninja with your Gunstringer 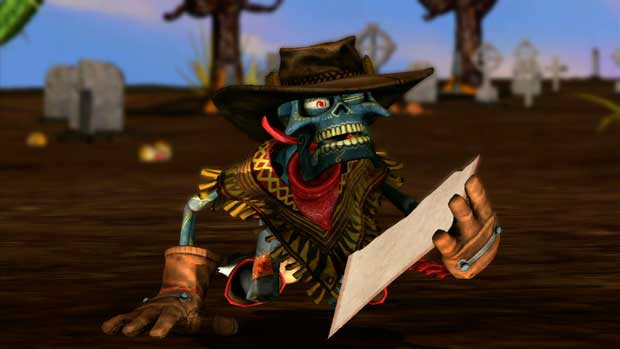 Twisted Pixel has got even more to come in 2011, following up their impressive sequel Ms. Splosion Man.  The company will release The Gunstringer, a western inspired Kinect adventure that will release at retail in September.  Microsoft announced recently that instead of offering The Gunstringer on Xbox Live Arcade it would be full retail release, and further more, it will also include extras which were announced today.  All copies of The Gunstringer will come with a copy of Fruit Ninja Kinect.

Fruit Ninja has already seen great success in the mobile market and the Kinect fit seems like a perfect match.  Fruit Ninja will launch on Xbox Live Arcade in mid-August during the home stretch of the Summer of Arcade promotion.  If you’re planning on getting The Gunstringer you might want to hold off on Fruit Ninja Kinect for the time being.  Aside from the downloadable extra, The Gunstringer will also come bundled with free codes for DLC, which include avatar gear and a new level.

The Gunstringer is one of the first attempts at a core title completely dependent on the Kinect.  We’ll see how it turns out this September.

Home / Game News / Get some Fruit Ninja with your Gunstringer