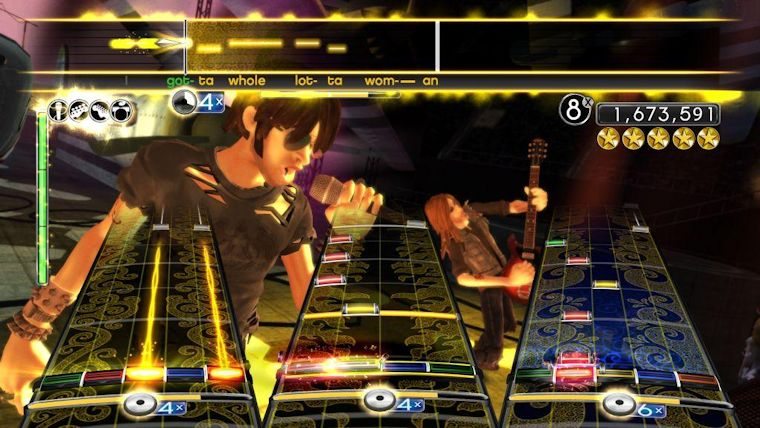 Guitar Hero may have started the full on music game trend in the mid-2000’s, but Rock Band took it to an entirely new level with full band instruments and constant DLC additions. After the market became saturated, both series seemingly died, but both are just bound to return at some point. Rock Band’s return has been teased in the past and now with Harmonix’ latest venture Fantasia: Music Evolved coming out this week, the developer has once again teased the inevitable Rock Band 4.

In an interview with Forbes, Harmonix’ Nick Chester answered a slew of questions about the new Fantasia: Music Evolved, but naturally Rock Band came up. Chester discussed the staying popularity of the series by saying the following:

“3 years after we’ve launched Rock Band 3 as a retail title and the quote/unquote ‘music games are dead’ hyperbole, there are literally hundreds of thousands of unique people still playing the game monthly. And we haven’t even released any DLC in forever. There’s a hardcore base of players still actively interested in this game.”

Chester continued by talking about how he believes people are ready for a new entry in the series by now based on all the talk he hears at every event he goes to, most recently the GameStop Manager’s Conference.

Perhaps the biggest part of the interview was when Chester was asked about the possibility of compatibility on the new consoles with the old plastic instruments, in which he said:

“That’s an excellent question. We would love for that to happen and we’d do everything in our power to make sure there’s compatibility with those instruments if we were to make another Rock Band game. We’ve already committed to building this huge library of downloadable content that we’d hope to be able to bring to another generation of consoles. We’ve already done that a little with Dance Central Spotlight, and we know it’s possible. That thinking carries over to the instruments as well.”

This would be a huge plus for the game, as we wouldn’t have to buy brand new instruments and not have to start from scratch with some of our massive song libraries. As Chester said, “when the time’s right we will absolutely come back to it,” so hopefully that will be sooner rather than later.