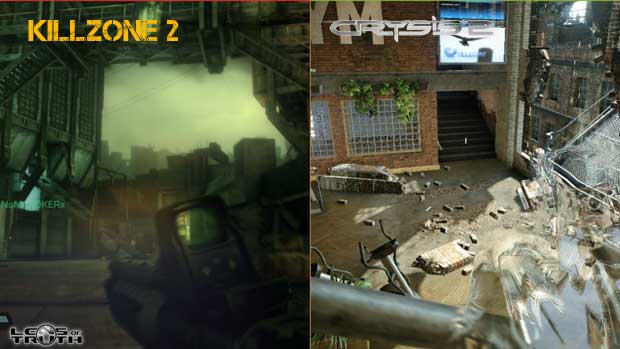 What happens when you take a two year old game, Killzone 2 and put it up against one of the most anticipated games of 2011, Crysis 2?  The unlikely, that’s what.  If you’ve played Killzone 2 you know the graphics powerhouse that the game is.  If you haven’t played it, I bet you’ve heard about it.

Now the guys at Lens of Truth combed over the finer details of  the Crysis 2 beta and Killzone 2 only to have an unlikely winner, Killzone 2.  Two years after it’s initial release, Killzone 2 is still holding strong as one of the finest looking games of this generation.

“Based on this early Crysis 2 multiplayer demo we feel that Killzone 2 still has a slight graphical advantage, keep in mind that this is only our opinion. Although Crysis 2 definitely has the potential to dethrone Killzone 2 as the FPS graphical champ, until its’ retail release on March 22nd all we can do is speculate.

Then again, Crysis 2 still has Killzone 3 right around the corner to deal with. One things for sure, 2011 is shaping up to be one of the best years the gaming community has seen in quite a long time, and we’ll be right here with you going along for the ride.”