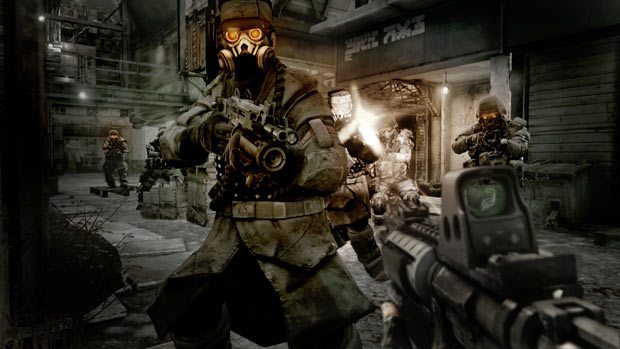 The Beta leading up to the launch of Killzone 3, has been successful.  Many have gotten a chance to jump in and see what Killzone 3 multiplayer is all about, first hand. Through the testing Guerrilla has managed to make many on-the-fly changes to the game to better the experience for all.  And now in just a few days, the game will release at retail.  You can expect many other changes coming to the game when it does.

Here’s a full list of the changes to expect when logging back into Killzone 3 after February 22nd.

A fix to the “Your Faction Has Won/Lost” issue, along with all oddities that resulted from this occurring
An issue that allowed more than two clans to join a clan match will be fixed
Increased Accuracy, Bullet Damage and Faster Reload Ribbons will update correctly on personal statistics screens
We’ve simplified the process to invite players into your game (just one button press)
The radius of the Marksman’s Scramble++ has been lowered
Medic’s Revive distance increased and cooldown to re-use is decreased
No collision on mortally wounded player bodies
Increased player stamina
An icon will be shown in the menu when you have a Killzone 3 message in your inbox

Shortly after the game’s release, you’ll also see these changes patched in:

Support for color-blind players
Implement unranked custom games for players to create private or clan matches
Enhanced custom games functionality that will allow players to:
Control over games modes and settings
Secure games, allowing you to invite the players you want to play with
The ability to prevent abilities and weapons from being used
Toggling on and off functionality, such as ribbons, skills, explosives, etc.
Selecting which careers you want available to players
Allow friendly fire to be turned on or off
Faction switching enabled or disabled
The Clan Officer role will be added to clans
Separate turn speeds for hip-fire and ADS
Overly enthusiastic death screams will be toned down
Increased the amount of kills required to win a Guerrilla Warfare match
Increased Accuracy ribbon will have its effectiveness lowered
Likewise, the Bullet Damage ribbon will have its effectiveness lowered as well
Matches will end if the other team forfeits (i.e. too few, or no players on the enemy team)
Matchmaking enhancements that will close and merge games based on player count, which will keep games more full
Balance factions out by moving players to the other team at the end of the match if one team is lopsided
The ability to turn off HUD markers for point pop-ups and objectives
A menu option to allow squad-only chat
The addition of a Mute All button
Scoreboard flickering will be fixed
Clans will no longer get matched against other clans that have many more players than they do (i.e. 4 vs. 7, 5 vs. 8)

Guerrilla has noted that this is just the beginning of the tweaks to be expected to Killzone 3.  Expect ongoing support for the game for some time to come.