Killzone 3: What to Expect From The Beta

The latest news in the world of video games at Attack of the Fanboy
January 22nd, 2011 by William Schwartz 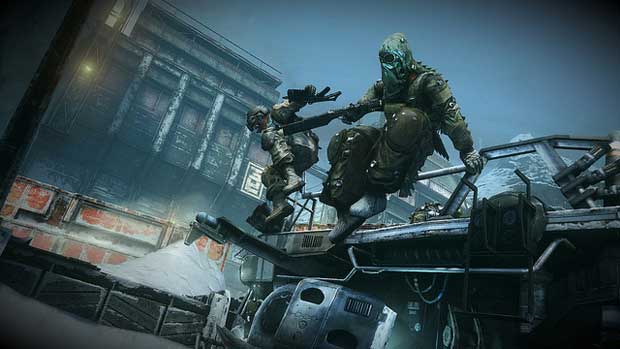 The recent announcement of a public beta for Killzone 3 took many by surprise as a beta ran earlier in 2010 that let Playstation 3 Plus subscribers get a taste of the multiplayer action in Killzone 3.  This time around, the flood gates are opening for all 60 million PSN members.  From February 2nd to February 14th the open beta will let all PS3 gamers try before they buy the upcoming shooter.

The beta will give a great impression of what to expect from the full title.  It will support both the PlayStation Move and standard Dual Shock controller setups, for those itching to try out their new toys.  And will bring back the Frozen Dam multiplayer level which was in the original beta for PlayStation Plus Members.

Level Description
Abandoned for years, the dam facility in the frozen south has recently been occupied by the Helghast who are using it as a forward operating base to co-ordinate their presence in the region. Controlling Mortar Beacons and the numerous Tactical Spawn Areas is key to securing this sprawling facility.

Operations Description
After having identified this frozen dam as the Helghast base of operations, the ISA have been instructed to secure the docks and then destroy the dam. Sweep through the shorefront facility and bring the dam crumbling to its knees!  As Helghast it’s your job to safeguard the dam facility. The ISA force is on their way here to destroy the dam. Make sure they fail!

Four Gamemodes will available for trial throughout the beta period.

Guerrilla Warfare (16 players)
Guerrilla Warfare is a standalone multiplayer mode similar to classic Team Deathmatch: You and your teammates must try to kill as many of the opposing team as you can before the timer runs out. In this mode, only the downstream monitor houses and repair bay are accessible, giving the map a very frantic pace.

Warzone (24 players)
If you’ve played Killzone 2, you may already be familiar with Warzone. It’s a round-based multiplayer campaign that consists of five randomly ordered mini-missions. In this mode, the power house and penstocks directly under the dam are accessible as well, so there’s more room to come up with different strategies and approaches to your goal.

Operations (16 players)
Operations is a new multiplayer campaign which aims to deliver a more cinematic, story-based gameplay experience, similar to that of Killzone 3′s single-player mode. It consists of a sequence of linear mini-missions, in which the ISA must try to secure the docks and destroy the dam, while the Helghast must try to protect the dam facility.

Botzone (one player and up to 15 bots)
Botzone is an offline multiplayer mode ideal for those looking to get to grips with the controls, the weapons or the map layout before going up against live players. Each of the aforementioned multiplayer modes can be played offline, against CPU-controlled opponents.

What we don’t know, are any surprises that Sony may have up their sleeve.  And since in the announcement for the beta they announced that surprises would be coming you can look for more info coming soon.

For a quick look at the multiplayer of Killzone 3 take a look at the video below.  It’s not from the Frozen Dam but it will give you a general idea of what to expect from the coming beta.  You can also check out all of our screenshots and videos at our Killzone 3 page.  For a list of all the maps, gamemodes, and descriptions included in the retail version of Killzone 3 Visit Here

Home / Game News / Killzone 3: What to Expect From The Beta