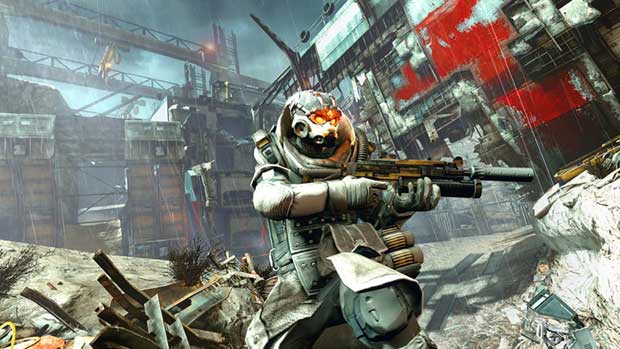 Killzone 3 DLC was announced a while back, with maps and gametypes already set and ready to go.  The Steel Rain map pack includes two new maps, the DLC will run you $4.99 and will be available on March 29th according to Amazon.com.  The DLC is not available for purchase just yet, and gives no description of the content on the amazon website.  When Guerrilla announced the content last month, the Steel Rain Map Pack will include the two levels and gametypes below.

JUNKYARD
Game Type: Guerrilla Warfare (16 players)
Description:
The junkyards of Helghan are a wasteland to some, but a valuable resource to others. In the main junk processing facility of Helghan, ISA and Helghast Forces are clashing in an attempt to salvage vehicles and supplies for their war effort. Jetpacks are the key to taking the high ground, but the huge Exoskeletons can quickly turn the tide of the battle on the ground.

STAHL ARMS
Game Type: Warzone (24 Players)
Description:
As the Helghast write a new and appalling chapter on humanoid experimentation, beleaguered ISA Forces mount a desperate attack on the notorious Stahl Arms research facility, where they hope to free ISA soldiers who have been taken captive. Stahl’s Helghast forces will stop at nothing to ensure that the ISA attack fails, even if it means exterminating the very prisoners they need for their weapons research.