The best feature of Killzone 3 is multiplayer 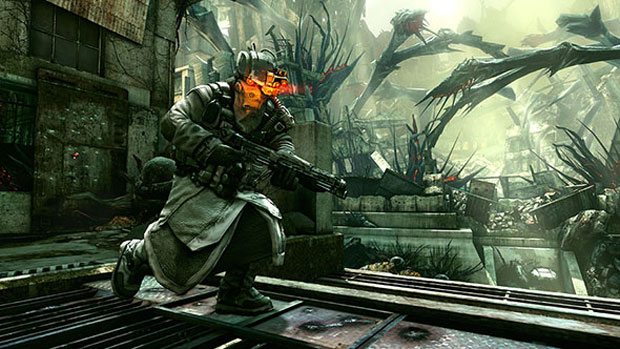 The community has now populated the online servers for Killzone 3, and with the game’s release the full power of the game’s competitive multiplayer suite is now showcasing it’s capabilities and potential for longevity.  What you’re gonna find when you fire up Killzone 3’s multiplayer component is a completely engaging and addicting multiplayer experience.  One that is not easily duplicated either on the PS3 or other consoles.

First and foremost, no matter what type of gamer you are, whether you prefer the straight up tactics of a team deathmatch, or more team based approach, Killzone 3 has something to offer you. And while it doesn’t quite get to the number of options that a Call of Duty: Black Ops or Halo Reach has, it certainly makes up for having less by making less more.  If you were to flat out compare Killzone 3 to Halo: Reach and Black: Ops, obviously the first thing that sticks out like a sore thumb is graphics.  Both games pale in comparison to the amount of action that Killzone 3 is pushing on any given moment.  Aside from the frantic gunfights, explosions, and chaos that is ensuing on the battlefield, the environments of Killzone 3’s multiplayer map selection are quite amazing.  Each one has a more distinct feel to it than the previous Killzone games.  And that’s saying alot,  considering that by many, Killzone 2’s multiplayer was respected as one of the best in its class.  One of the most important things that the developer addressed in Killzone 3 are the controls. For some, Killzone 2’s controls were far too heavy for a fast paced first person shooter.  I can’t say I agree wholeheartedly, but I can see where they were coming from.  They were just different.  But now, Guerrilla has fine tuned these controls to near perfection.  Making you into a highly mobile walking, running, jumping, death machine. I can’t stress enough just how well the controls were implemented in Killzone 3.  All of the realism was maintained from Killzone 2, and at the same time a level of responsiveness make the game feel much faster. Its quite a feat actually.

With these two things, the great changes to the controls and the awesome presentation, it’s nearly enough to consider this game to be one of the best in it’s class.  Giving even the most heralded of First Person Shooters a run for their monies.  However, it’s the game modes and mechanics that really drive home Killzone 3’s multiplayer.  The presentation and controls are of utmost importance, but every mode is fun in it’s own right because of these things.  But the one that brings it all together, is Operations.  Operations is probably one of my favorite games to play, ever.  Seriously, it’s a good time.  It takes every good thing about Killzone 3 puts it into an online microcosm and hopes for the best.  And the best indeed happens.  If you haven’t had the chance to play it, I suggest you do.  It might change the way you view some of your favorite online FPS games.

Basically, what it does is put the ISA up against the Helghast to attack or defend specific objectives.  All the while, the game is telling a story starring your online character.  Now I’ve heard people complain that the mode is unbalanced.  I think at first glance it might seem that way, but a well organized team approach at securing the objectives as the attackers can thwart any so-called bias to the defenders.  And it’s my opinion that it should be hard.  There should be a level of accomplishment when you make your way through the enemy defenses to secure the objectives.  And there is.  It’s perfection in my book, and my book is quite long as fan of many of today’s modern shooters.

Killzone 3 certainly takes a page from some of today’s greatest games. It takes the fun and fast paced action of the Call of Duty series, the strategical offerings of Team Fortress 2, and the tight gameplay of a Halo-like game, to form what is in my opinion a game that joins the ranks of the most elite of the first person shooters of any generation.   It’s been a long time coming actually.  The game that finally realizes the premiere first person shooter for the PS3 that can stand shoulder to shoulder with the likes of the most well known in the industry.

Home / Game News / The best feature of Killzone 3 is multiplayer