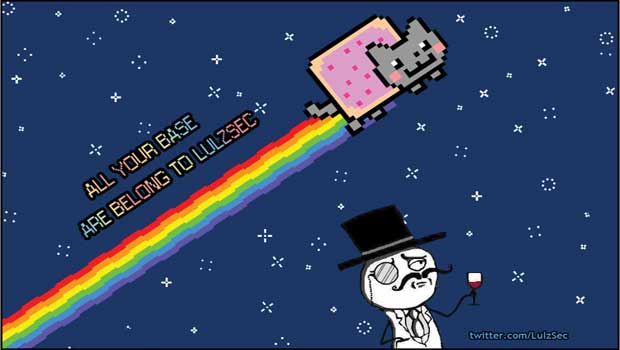 It seems as though it were only yesterday when the gaming media was flooding with reports of PSN being severely breached, causing a temporary shutdown of Sony’s online service and the single greatest fiscal loss that the company had seen since its inception. Today, about 50 days later, the infamous group of hackers reportedly behind the attacks and collectively known as “LulzSec” have allegedly called it quits.

The group has just released a press statement titled, “50 Days of Lulz”, which begins with an attempt to explain their incessant attacks that lasted for a 2-month period:

For the past 50 days we’ve been disrupting and exposing corporations, governments, often the general population itself, and quite possibly everything in between, just because we could. All to selflessly entertain others – vanity, fame, recognition, all of these things are shadowed by our desire for that which we all love. The raw, uninterrupted, chaotic thrill of entertainment and anarchy. It’s what we all crave, even the seemingly lifeless politicians and emotionless, middle-aged self-titled failures. You are not failures. You have not blown away. You can get what you want and you are worth having it, believe in yourself.

The press release also contains a sort of “call to arms” for other hackers interested in whatever cause the group was attempting to justify, stating that they now hope the “revolution” will continue on without them. Whatever your gaming preference, I’m not sure that Sony or any other gaming company qualifies as “oppressors” as they’re referred to here:

Again, behind the mask, behind the insanity and mayhem, we truly believe in the AntiSec movement. We believe in it so strongly that we brought it back, much to the dismay of those looking for more anarchic lulz. We hope, wish, even beg, that the movement manifests itself into a revolution that can continue on without us. The support we’ve gathered for it in such a short space of time is truly overwhelming, and not to mention humbling. Please don’t stop. Together, united, we can stomp down our common oppressors and imbue ourselves with the power and freedom we deserve.

Of course, the statement would not be complete without a final release of internal information from a number of sources including company documents from AT&T.

Even if this announcement does have merit and LulzSec are in fact through with their attacks, I find it hard to believe that they always set out to end their terror after just 2 months. More likely, the announcement comes as a result of 19 year old Ryan Clearly’s arrest, a hacker who is suspected of having close ties with the group. A more believable scenario is that the hackers felt the walls closing in and decided to quit while they were ahead.

LulzSec end their reign of terror with the hope that they left behind some sort of “inspiration, fear, denial, happiness, approval, disapproval, mockery, embarrassment, thoughtfulness, jealousy, hate, even love,” and continue with, “If anything, we hope we had a microscopic impact on someone, somewhere. Anywhere.” I have a feeling you had more than a microscopic impact on a great deal of people – people who had their entertainment taken away for an extended period, people who had personal information stolen from them and released to the internet, and people who had to put up with bullshit for months when all they wanted to do was use their expensive consoles and their respective online services. I know that there are a large number of gamers who are not sad to see the “Lulz Boat” sail away, hoping that its next destination is over a waterfall.