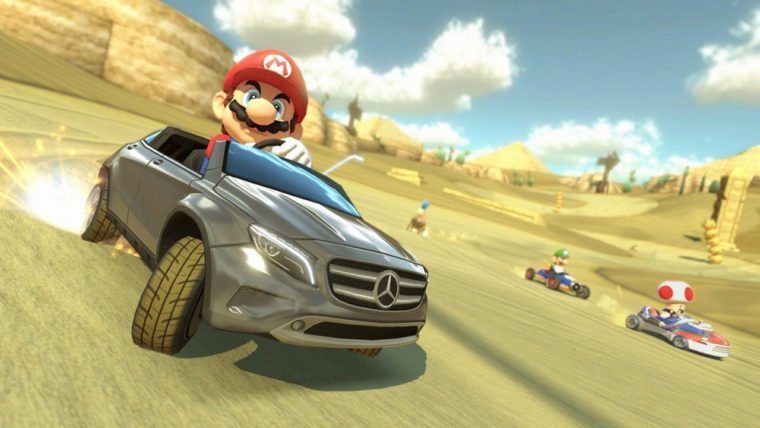 Nintendo has released the first official gameplay footage of the new karts featured in the upcoming DLC pack for Mario Kart 8. As we previously reported, Mario Kart 8 is getting some free DLC in the form of special Mercedes-Benz styled Karts. The new karts are being added as part of the huge patch coming later this month. So far we have only seen them in screenshots and in that awesome live-action commercial, but today we get our first-look at the karts in action.

As you can see in the video multiple players can drive the special karts at the same time, resulting in a track full of Mercedes-Benz’s. Many fans have felt that the new karts don’t fit with the colorful and fun aesthetic of Mario Kart 8. Reddit user Orfez commented saying “This looks so out of place, it’s horrid. This is a free DLC, no doubt? No one is going to pay to play this advertisement.”

That last part has been the solace for anyone who is upset by the product placement. The Mario Kart 8 Mercedes-Benz DLC is totally optional, and totally free. If you don’t want them in your game you just shouldn’t download it. However, many others found their inclusion humorous, such as Reddit user Rocket_Pope who said “Oh my god, I’m not a huge fan of blatant product placement but this is just fucking hilarious. The cars they’re so teeny”.

Obviously this set of DLC is seen as an advertisement for Mercedes-Benz. Getting their cars in front of the huge audience of people who bought Mario Kart 8. But even with that, it is free content for a game that already had a lot of good stuff in it.

The Mario Kart 8 Mercedes-Benz DLC pack is set to release on August 27th in Japan. This date might be true for other countries as well, but we’ll have to wait to see.