Mass Effect 3 multiplayer expansion to come in form of DLC? 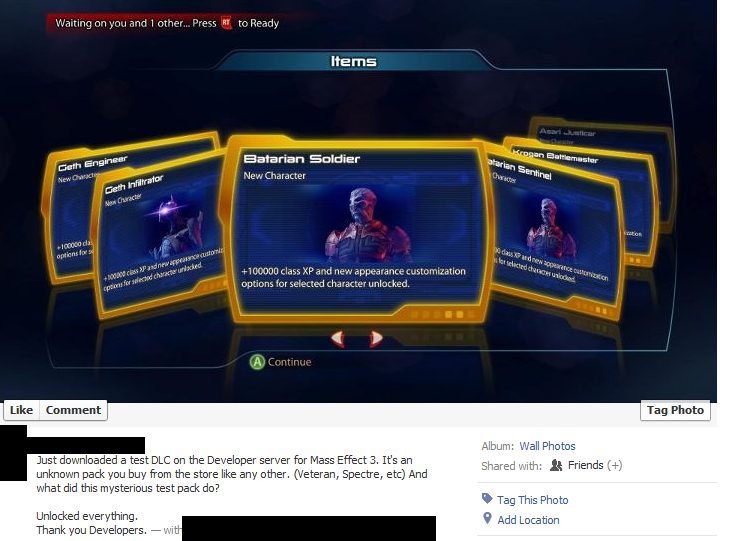 Just yesterday, in-between rants of cursing BioWare for essentially forcing me to play the game’s multiplayer in order to get the “best” single-player ending, I asked, “Why does Mass Effect 3 still not have a PvP multiplayer component?” The community and fan interest are unquestionably there, and the question as to whether or not BioWare could implement the power wheel successfully into a fast-paced multiplayer has been firmly answered. While my inquiry has yet to be addressed directly (Casey Hudson – answer my Tweets, dammit!), we may in fact be one step closer from the looks of this leaked image that a user was able to snap while playing Mass Effect 3‘s co-op mode.

The above image, which was taken by an anonymous gamer and uploaded to his Facebook was naturally picked up by Reddit and began to make its way around the Internet.

The screenshot appears to show a multiplayer unlock-pack featuring a bunch of new multiplayer classes including the addition of the Geth and Batarian races. New character types added in the pack include a Geth Engineer, Geth Infiltrator, Batarian Soldier, Batarian Sentinel, Krogan Battlemaster and Asari Justicar.

The gamer noted that the unlocked pack was “test DLC” that was to be released to the masses in the near future. Once he had unlocked the pack, the DLC became available from the ME3 multiplayer store.

While this doesn’t confirm anything other than the already-plausible fact that BioWare was planning on expanding the multiplayer component of Mass Effect 3, it does give us a glimmer of hope that a PvP element is perhaps in the works. Would BioWare put all of this work and dedication solely into trying to make a more expansive co-op mode? Let’s hope not. We want to shoot each other and/or see who among us is the best biotic!