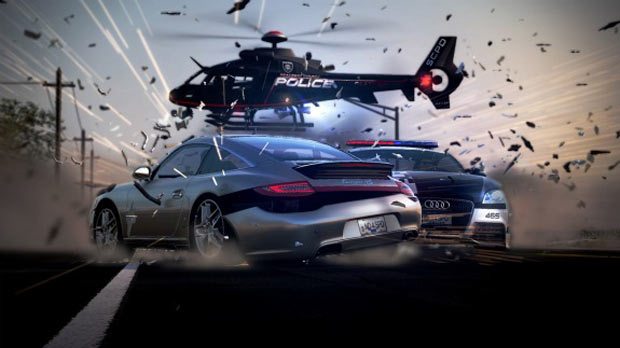 Need For Speed: Hot Pursuit will be getting three new content packs starting next week.  Criterion has just announced the three new DLC packs for their award winning racing game.

Armed and Dangerous, will launch on February 22nd and will feature two new game modes: Most Wanted and Arms Race. Most Wanted will have the police chase down a specific racer, while the rest of the racer group protects the target.  Arms Race is free-for-all racing with weapons enabled. Also included in the pack will be three new trophies/achievements. The Armed and Dangerous DLC is set to launch for 560 MS points or $6.99.

Porsche Unleashed will release on March 8th with  the 82 Porsche 911 Turbo, Porsche 959 and 911 Speedster. Alongside the new cars there are ten new events and four new trophies/achievements. This DLC will cost you the same price as the Lamborghini Pack $5.49 / 560 MS Points.

As of this time the three DLC packs will be releasing for the PS3 and Xbox 360. There have been no plans announced by EA to bring the content to the PC.

Need for Speed Hot Pursuit: Porsche Unleashed
The third pack, Porsche Unleashed, continues to add to the already stellar lineup of Porsche cars in the game. Any car enthusiast will be delighted to see the Porsche 911 Turbo (1982 Edition) make its way into the game, along with the Porsche 959 and 911 Speedster. The Porsche 911 Turbo is a high performance tier one car, designed to enable players to go back and reignite their earliest rivalries and beat their friends’ times. Also included in this pack are 10 new events and four new trophies and achievements. Need for Speed Hot Pursuit Porsche Unleashed will be available March 8 for £5.49 (560 Microsoft Points) on the PlayStation Network or Xbox LIVE Marketplace.