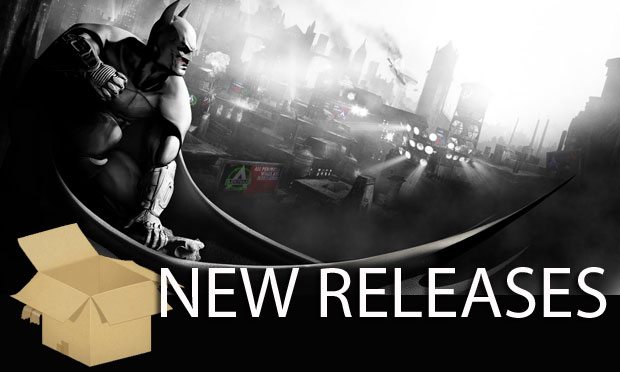 These are your video game releases for the week of October 17th, 2011.

Batman: Arkham City – (Xbox 360, PS3) – Batman: Arkham City is third-person Action-Adventure game that delivers an authentic Dark Knight experience rooted in an original and engrossing story as well as a combination of melee combat, stealth, investigative and speed-based challenge gameplay. A sequel to 2009’sBatman: Arkham Asylum, Arkham City features the full range of classic enemies seen in the previous game, in addition to Catwoman, who is a playable character and has her own storyline in the new release. Additional features include: a range of new gadgets, an increased number of possible melee opponents and a range of movement options for Batman that include leaping, sliding, gliding and the grapple hook.

Ratchet & Clank: All For One – (PS3) – Ratchet and Clank: All 4 One is a multiplayer Action-Adventure-Platforming game that continues the popular Ratchet & Clank franchise on PlayStation 3. The tenth game overall in the franchise, Ratchet and Clank: All 4 One is the first game in a new Ratchet & Clank game series and features a franchise first, four-player co-op functionality. This is available both locally and online. Additional features include the ability to play as Ratchet, Clank, Qwark or Dr. Nefarious, each with their own unique skills and an arsenal of co-op weapons, and a full cinematic play experience throughout the entire game.

Payday: The Heist – (PS3, PC) – PAYDAY The Heist is an action filled first person shooter game that lets players take on the role of a hardened career criminal executing intense, dynamic heists in constant pursuit of the next “big score”. Navigate diverse urban settings with three partners in crime – controlled by either AI or your best buddies in co-op multiplayer. Load out with an array of weaponry and equipment as you embark on a spectacular crime spree through six high-stake heists, including banks robberies, prisoner extractions and armored car hijackings.

The Sims 3: Pets – (PS3, PC, Xbox 360, 3DS, Mac) –  Bring excitement and surprise into your Sims’ lives with pets! Create the perfect (or imperfect) pets for your Sims, from fierce guard dogs to destructive kittens to trusty horses and more as you determine not only how your Sims’ pets look but their personality traits as well. With a variety of new activities and social interactions, take direct control of your Sims’ pets and explore new ways to mess with their lives. Give your Sims a new member of their household and discover all-new ways to play with life!

Rocksmith – (PS3, Xbox 360, PC) – Introducing the next stage in the evolution of the music game. Rocksmith, the first and only game where you can plug into any real guitar.  Featuring gameplay that automatically adjusts to your personal ability and innovative game design that makes playing music visually intuitive, Rocksmith will engage experienced musicians as well as those who have never picked up a guitar in their life.

Jane’s Advanced Strike Fighter – (Xbox 360, PS3, PC) – J.A.S.F. Jane’s Advanced Strike Fighters is set in the fictional country of Azbaristan; the once-great great nation has been torn apart by a decade of civil war, followed by almost a decade of uneasy peace.  The ten-year war resulted in huge territorial gains for Northern People’s Republic Azbaristan and their controlling political party, the Northern People’s Party, giving them control of all of the country except for the oil-rich province that is all that is left of South Azbaristan.

Everybody Dance – (PS3) – Everybody Dance delivers a high-energy dance experience set to a soundtrack of 40 chart-topping party hits including Usher’s “OMG,” “Party Rock Anthem” by LMFAO, and “Barbra Streisand” by Duck Sauce, that feature the original artist’s music videos. Using the PlayStation®Move motion controller and PlayStation®Eye camera to track and score moves, players can test their dancing skills with three difficulty levels, each featuring unique routines for every track produced by world-renowned choreographers. Everybody Dance allows players to hit the floor solo style, team up with a second player for a cooperative Partner Routine, challenge a friend to a competitive Dance Battle, or use the Party Play mode where up to 20 players can go head-to-head for the ultimate dance-off. Players can also use Everybody Dance’s Dance Class feature to improve their skills through detailed routine breakdowns and then take their game to the next level by developing original choreography using the Dance Creator feature.

Ben 10: Galactic Racing – (Xbox 360, PS3, PC, Wii, DS, 3DS) – In BEN 10 Galactic Racing, the first racing game based on the popular BEN 10 television series on Cartoon Network, fans will enjoy a BEN 10 multiplayer experience in a galactic grand prix filled with surprises at every turn. Play as either Ben, Kevin or choose from 13 fan-favorite aliens. BEN 10 Galactic Racing presents the ultimate racing experience, where every character has a special ability to utilize on the race track and even Ben can transform into different aliens mid-race!

Jimmie Johnson’s Anything with an Engine – (Xbox 360, PlayStation 3, Wii ) – Get behind the wheel of a one-of-a-kind vehicle and get ready to bring down the competition in Jimmie Johnson’s Anything with an Engine. Race a dumpster, a lawn mower or even a shopping cart across 13 distinct tracks filled with traps and obstacles. Engage in heart-pounding elimination-style circuits, one-on-one duels or head-on challenges. Modify your vehicle with powerful pneumatic side-rams, front-firing missiles or rear-deploying mines to knock out the competition. Invite your friends to share in the excitement and play online with up to eight friends or in four-player split-screen mode.

Minute to Win It – (Xbox 360 Kinect) – Tackle unique challenges as you compete to win $1 million in NBC’s hit game show, “Minute to Win It”. With encouragement from All-American chef and host Guy Fieri, you will compete in a series of simple, yet intimidating games that can lead you to a $1 million prize! The everyday household items used in each challenge may seem harmless, but it will take nerves of steel to conquer all the tasks. So be careful, because when that minute is up, so is your chance at winning!

Tropico 4 – (Xbox 360) –  Tropico 4 is a single player Strategy-City Building game in which players again take on the role of El Presidente, the dictator of the island paradise of Tropico. As in previous game versions you must take full control of the island, and in charting its path be and be seen by residents as anything from tyrannical to benevolent. Features include: a new campaign consisting of 20 missions on 10 new maps, 20 new building types, new interactive disasters, national agendas, a trading system and much more.

Big Foot: King of Krush – (Wii) – Crush cars and break records as Bigfoot comes to you larger than life in 3D! Unleash the power of Bigfoot as you demolish metal, shatter glass and win championships. Prove you’re the baddest Bigfoot around, and the competition will be eatin’ your dust!

Pet Zombies – (3DS) – There’s no better pet than an undead pet! Pet Zombies for Nintendo 3DS lets you reanimate your very own customizable zombies that you can play with, care for, or torment in a variety of environments where they can shamble, shuffle and lurch. Bond with your zombie by providing it food, toys and interaction, but be careful; if you neglect your zombie, you may find yourself minus a finger, or…a brain!