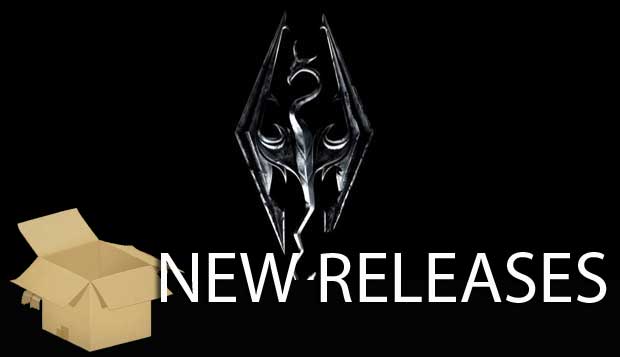 These are your video game releases for the week of November 7th, 2011.

The Elder Scrolls V: Skyrim – (Xbox 360, PS3, PC) – The Empire of Tamriel is on the edge. The High King of Skyrim has been murdered. Alliances form as claims to the throne are made. In the midst of this conflict, a far more dangerous, ancient evil is awakened. Dragons, long lost to the passages of the Elder Scrolls, have returned to Tamriel. The future of Skyrim, even the Empire itself, hangs in the balance as they wait for the prophesized Dragonborn to come; a hero born with the power of The Voice, and the only one who can stand amongst the dragons.

L.A. Noire The Complete Edition – (PC) – L.A Noire is an interactive detective story set in the classic noir period in the late 1940’s blending action detection and complex storytelling and draws into an open ended challenge to solve a series of gruesome murders. Set in a perfectly recreated Los Angeles before freeways, with a post war backdrop of corruption , drugs and jazz, L.A. Noire will truly blend cinema and gaming.

LEGO Harry Potter: Years 5-7 (PS3, PSP, Xbox 360, Wii, DS) – LEGO Harry Potter: Years 5-7 is an Action-Adventure game that combines fun, familiar and family-friendly LEGO video game play mechanics with the storyline and characters of the latter half of the Harry Potter universe. The game is built on the events from the movie series ranging from Harry Potter and the Order of the Phoenix through Harry Potter and the Deathly Hallows – Part 2. Features include: 24 story events, and 16 lessons, new charms, spells and dueling skills, new characters and drop-in/dropout co-op support.

Heavy Rain Director’s Cut – (PS3) – Heavy Rain is an interactive, single player, action adventure game in which every decision players make influences the evolution of a desperate quest to catch a deadly killer poised to strike again. Featuring a complex and dark storyline meant for mature audiences, the game is a PlayStation 3 exclusive featuring a variety of possible endings, advanced crime scene analysis, replayable chapters, four playable characters and the ability to continue play as remaining characters in the event of your current character’s death.

Happy Feet Two – (PS3, Xbox 360, Wii, 3DS, DS) – It’s Time to Get Happy! In the footsteps of the Academy Award winning Happy Feet comes a beat-bumping, musical adventure based on the coolest movie of the year. In Happy Feet Two: The Videogame, play as Mumble as he traverses the Antarctic landscape with his best friend Ramon to save their penguin tribe from extinction.

Chrono Cross – (PS3, PSP) – The sequel to CHRONO TRIGGER, is one of the most ambitious role-playing games ever made. There are over 40 playable characters, each with their back-story, special moves, abilities, and weapons. The story spans two discs and follows the story of Serge, a young man who is able to cross dimensions. Suddenly he is pulled between worlds, trying to figure out his own past at the same time. The graphics are bright and beautiful, utilizing the PlayStation’s capabilities to the fullest. The polygonal character models are huge and detailed, and the pre-rendered backgrounds are immaculately detailed. The music is composed and arranged by Yasunori Mitsuda, and features very realistic-sounding synthesizers.

Big League Sports – (Xbox 360) – Get into the game like you’ve always dreamed of with Kinect for Xbox 360 and Big League Sports. Featuring six exciting sports, including football, baseball, basketball, soccer, hockey and golf, Big League Sports puts you on the diamond, gridiron, rink, pitch, course and hardwood. Showcase your skills in 18 challenging and fun competitions, and take on your friends in thrilling multiplayer action. Use your entire body for fun-filled gameplay as you dominate the competition and charge up the real-time leaderboards. With the power of Kinect, you’ll be able to elevate your game and take it to the Big Leagues.

Heavy Fire: Afghanistan (Wii, PS3, PC) – Stay sharp in this blisteringly fast-paced modern day shooter. Protect your team as you move from cover to cover, eliminating threats as they appear! Fight on foot or in a variety of vehicles including tanks, helicopters, and APCs. Utilize weapons ranging from handguns to mounted cannons and grenades to stay alive, keep fighting, and complete your mission.

Cave Story 3D – (3DS) – Cave Story 3D embodies the unmistakable Cave Story feel in a new 3-dimensional form. The legendary game mechanics have been combined with cutting-edge handheld graphics and a remixed soundtrack to give it new life!