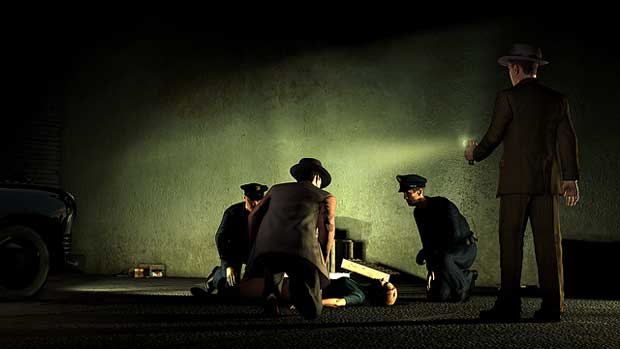 This weekend the launch announcement trailer for L.A. Noire somehow squeezed by security out to the vast series of tubes otherwise known as the internets.  Pulled from many sites as this wasn’t approved by RockStar and Take Two it’s finally been revealed, officially this time.  In the latest from the gang at Team Bondi we’re starting to get a much clearer picture of the gameplay behind L.A. Noire, and it looks fantastic.

The facial animations have been front and center for sometime, but recognizing traits to tell if someone is lying or not, is just getting a little too crazy.  I can tell already I’m going to appreciate L.A. Noire.  I don’t know how many games I have reviewed where I said, the facial animations look bad or the bad lip synching breaks the immersion of the game.  Finally, a game that is going to harness the technology to make the most realistic faces in a video game.

If you haven’t seen the tech video, which we posted earlier this morning, you most certainly should watch it.  It will do well to get you excited for L.A. Noire.  But don’t go getting all worked up you still have a solid four months wait ahead of you barring an unnanounced demo coming our way.

L.A. Noire will release on May 17th in North America and the 20th in Europe.