Rocket League Hits Over 25 Million Players and a Billion Matches

The latest news in the world of video games at Attack of the Fanboy
January 11th, 2017 by Kyle Hanson 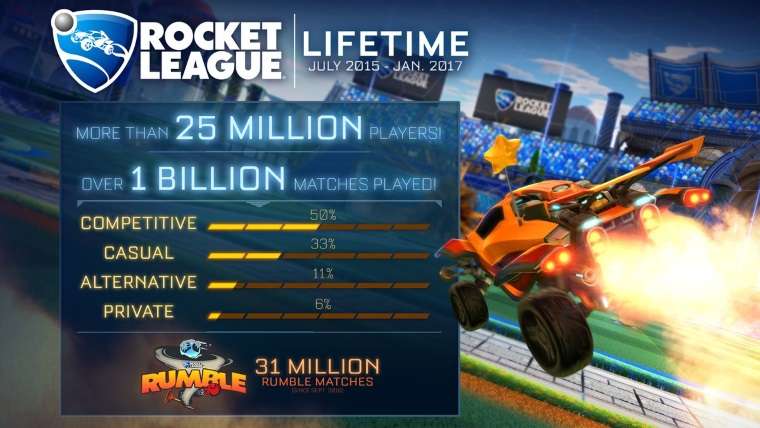 Rocket League is one of the biggest indie gaming success stories of the last few years. Going from a relatively unknown game to one of 2015 and 2016’s biggest sellers, the “soccer in cars” game has become a massive hit. We usually get regular reports of how many people have played Rocket League, and today we got something more.

According to the official twitter account, Rocket League has topped 25 million players who have accounted for over 1 billion matches. These figures are from the entire life of the game, starting in July 2015 and running till today. It also likely accounts for all platforms, meaning PS4, PC, and Xbox One.

The image then breaks these figures down further, showing that 50% of games were in competitive playlists, meaning the various ranked playlists available in Rocket League. 33% are in casual playlists, 11% in alternatives, likely such as the Hockey and Basketball style variations, and the final 6% were in private matches between players.

31 million of these games were in the Rumble playlist, which was seen by many as a throwaway game mode by many. Once it launched though, people jumped in and had a great time, despite it being less competitive than regular Rocket League matches. Given what these numbers show, it seems that Rocket League players are already getting their taste of competitive play, so maybe Rumble offers a nice respite from the grind.

Rocket League is currently trying to get a full eSports competition going, and has successfully hosted two official tournaments. The competitive nature of the game definitely lends itself to eSports. Each game has a five minute timer, keeping things short and focused, and the high skill ceiling has allowed for pro players that are pulling off insane moves that normal players can’t even attempt.

How’s your Rocket League progression going? Hitting those aerials? Let us know in the comments.