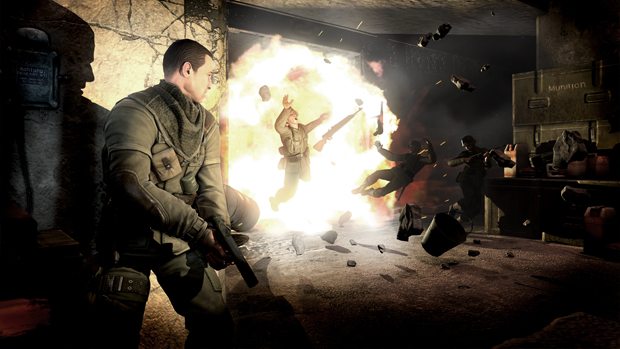 There are a number of gaming critics and players alike who will tell you that the WWII genre of games is without doubt the most saturated and cliched throughout the industry. Though that may be true, it doesn’t mean that a clever developer with a fresh and unique idea can’t  create a WWII title unlike anything you’ve seen.

This is exactly the idea behind Rebellion’s upcoming third-person stealth shooter, Sniper Elite V2. The franchise in fact made its debut in 2005 with the release of Sniper Elite for the Xbox, Ps2, Wii, and PC as players were put in the shoes of an Allied soldier who must go undercover during the Battle of Berlin as a Nazi sniper behind enemy lines and retrieve German nuclear technology before the Soviet Union. The same core idea returns for Sniper Elite V2, and judging from a new developer diary, the game will certainly not be a simple re-hash of the original.

Sniper Elite V2 will place heavy emphasis on the aspect of stealth. Knowing who to shoot and when to shoot them can be the difference between a lengthy/failed operation and will determine your ultimate success. Steve Hart, Senior Producer at Rebellion, states that the game is “a thinking man’s shooter” far removed from the run-and gun titles of late.  Similarly, lead designer Andrew Haith claims, “This is a game where you’ve got to think your way through each encounter. You have to take your time and measure the situation first.”

Players will take the role of U.S. sniper Karl Fairburne as he must rescue or eliminate members of a team of scientists working on Hitler’s deadly V2 rocket program before they fall into the hands of Stalin’s Red Army. Timing and patience will be factors of primary importance, so if you prefer a shooter in which you can approach every situation guns-blazing, this is probably not the game for you.

Shown in the video below, the renowned “bullet cam” from the original makes its return. Skillful, deadly shots are shown with a slow-motion sequence of the bullet running its full trajectory from barrel to target and will go one step further in showing the bullet enter the target, as well as exit it. It will also reveal, quite graphically, all of the damage given to the target’s internals in the process.

Sniper Elite V2 will be releasing in May 2012 and it’s quite obviously one to keep an eye out for, especially for shooter fans. Check out the developer diary below.