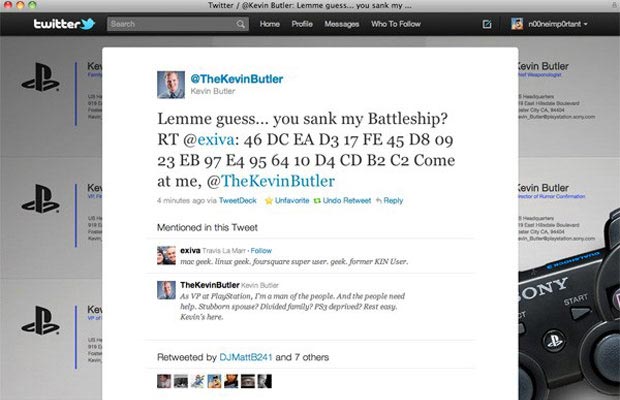 Kevin Butler, the PlayStation VP, recently accidentally re-tweeted the PS3 Root Key after a clever Twitter user sent him the key as a tweet. Butler responded stating, “Lemme guess… you sank my Battleship?” followed by the original tweet, clearly not knowing what he was actually sent.

What’s amazing about this is how completely oblivious Butler was to what he was replying to, and even more amazing that he re-tweeted the original message which provided all of his followers with the root key on their feed.

The tweet has since been deleted, but not before many followers have re-tweeted his comment. Recently, Sony released a statement stating they were going to take action against any and all users who post the key to the internet, after George Hotz originally released it. Does this mean Sony will target it’s own VP for doing exactly what they aren’t wanting? I seriously doubt it, although I advise him to be a lot more cautious in the future, or at least know how Twitter works if he’s going to continue using it.