Since its release earlier this year on Xbox 360, and subsequent port to PC late last month (still in early access), the zombie survival game State of Decay has attracted scorn and adulation in pretty much equal measure.  Fans praise the realism and scavenger-based survival themes reminiscent of The Walking Dead series, while critics bemoan the persistent world and quasi-real time events that can mean logging in after a day or two absence to find your base wiped out and your survivors….not.

One of the biggest gripes (and surprises) has been the permadeath of protagonists and the effects it can have on others from your base.  I’m not going to start a discussion on whether permadeath is good or bad, and how it affects gamer behaviour or attachment to their characters, but this is obviously a game mechanic that developer Undead Labs spent a great deal of time debating whether or not to implement.  Essentially there’s no better way to generate empathy for your character than to instil in the gamer’s mind that once you go down, that’s it.  No reloading screen, no rollback to an earlier save, no ghost running back to your body to respawn.  Nothing except a transition to the consciousness of a different survivor from your base, a brief eulogy, and a mission to retrieve the backpack of the fallen.  The first time my ‘main’ was ripped to pieces and I realised I’d just seen a 12 hour investment in character development go down the gullets of a dozen ravenous zombies I must confess to being a little annoyed, but lesson learned; from that moment I no longer kept tabs on my melee skill and instead quickly became best buddies with the ‘crouch’ key, which led to the next problem. 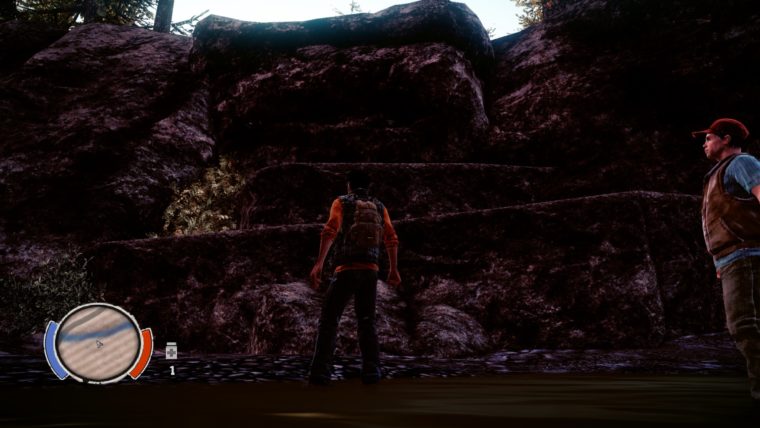 Moving slowly and silently through the dark townships was great, and it allowed some respite from the endless brain smashing I had become accustomed to, but in avoiding the random large groups of zombies that sometimes spawned, I inadvertently made my and my base’s survival that much harder, and triggered events that would create a desperate need for a non-stealth character like that which had just died.  On roads and in towns, despite this being billed as a ‘dynamic open world’ on the game’s homepage, random large groups of a dozen or so zombie hordes will spawn and shamble relentlessly towards either your base – resource-draining fight scenario, or an empty house where they will transform into a massive infestation and pump out more zombies that spread out into the surrounding areas.  These infestations also usually have ‘screamers’ who, well…put it this way; there’s a good chance a driver is a person who drives, and a runner is a person who runs, so let’s just assume we all know what a zombie called a ‘screamer’ would do.  That and they are nasty.  They call more zombies to them, they incapacitate you, and they need a good dose of Michonne.

So balance is something that doesn’t really work in your favour in this game, although I get the feeling that is precisely what the developers intended.  Along with a resistance to one particular style of play being favoured, missions will generally not stay available until whenever you feel like getting around to them.  NPCs will do their own thing including wander off on missions, get lost, or go scavenging for supplies.  If you start a mission to help neighbouring survivors and you fail, they die as mentioned above.  No re-do, no go-over, no reload button.  Simply you standing alone, in the silence, in a house full of zombie and human remains (assuming you survive as well).  This is what, I feel has some players offside.  Completionists like myself want to know that we can tick every box, clear every house, loot every stash, and do every mission in precisely the right order to maximise benefit for our character.  Undead Labs have structured the game so that simply is not possible, and we in fact have a sort of dynamic world that reacts to the things that we as a player do or do not get done.  This puts us in a position where we need to prioritise resources and sometimes our fellow survivors, and there is an opportunity cost for everything we do.  We’re not talking about anything as complex as Beyond: Two Souls in terms of divergence of gameplay, but there is just enough dynamic content here to invalidate the official State of Decay Gameguide.

So why is this sort of decision made by game developers?  In this case, obviously we need to empathise with our character.  We need to connect with them and want them to survive.  Undead Labs want us to make our own Daryl Dixson or Maggie Green and to nurture them, encourage them and to care about them, and to some extend they have been successful.  The cast of survivors that you can become responsible for have backstories, their moods affect morale in your base, and they can interact with you on a few different levels.  Ultimately though, I personally found the NPCs a little too derivative to be able to empathise with them, and I really felt no compulsion to play as each one to flesh out their character.

I was also disappointed with the promises made of the game as well.  If someone tells me there’s an “open sandbox world” then I want my 2-ton pickup traveling at 90kmph to tear through a dilapidated fence instead of coming to a sudden, smashing halt on impacting with it.  If Maya (one of the NPCs you pick up early in the game) suggests heading down to the river to see where we can cross, I want to cross wherever I want to, not where the level designers tell me I have to cross.  If I want to take Ed out of the camping area before he gets bitten and becomes ill, I expect the cliff face that we use in the game to be there whenever I want to use it…not when the game devs think it fits in the storyline.  If I’m told that I can “decide where you’d like to set up a fortified safe haven” then I’d like to choose the Fire Station in Marshall please.  Oh wait…I can’t?  I have to go for the Mexican restaurant instead?  No fun.  Call me a purist, but I also could not go past the running zombies.  Sorry.  Zombies don’t run. All up it’s a promising attempt at something like a cross between a Facebook game that entices you back regularly to make sure your crops don’t wither, survivors don’t die…whatever, and a gritty, realistic take on post-apocalyptic survival like Day Z.  At $20 for early access on Steam, plus $30 for a wired Xbox controller it wasn’t exactly a waste of money – I will enjoy it.  It looks nice and I’m sure as the porting process goes on it will look better.  I just hope that the PC crowd gets a game more appropriate for the platform.

Home / Game News / The State of State of Decay