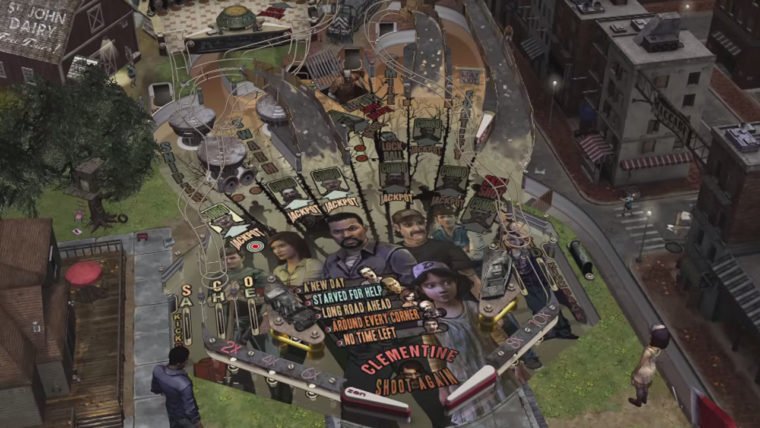 On the original announcement made by Zen Studios they go more in-depth into the design of the table. “The Walking Dead pinball table features choice-driven gameplay across each of Season One’s five episodes, along with original story dialogue from the award-winning cast.  Scenarios include choosing who to save and who to leave behind in a walker attack, solving problems and raising morale within the group, searching for food and supplies, acquiring important tools, and navigating through the herd amidst an oncoming walker breach.”

Locations featured in The Walking Dead Pinball include Clementine’s Treehouse, St. John’s Dairy Farm, Travelier Motel, Bell Tower, Train & Level Crossing, the RV and more. Lee, Clementine and a ton of zombies will be rendered in 3D on the table for various events, as seen in the trailer above. Original lines were recorded by the cast including Dave Fennoy (Lee) and Melissa Hutchison (Clementine).

Since The Walking Dead Pinball is DLC you will need to have Pinball FX 2 or Zen Pinball 2 depending on what platform you have. Pinball FX 2 is on Steam and Xbox, while Zen Pinball 2 is on Playstation and Android. Both games are free to download and will allow you to try out every table featured in the game. After that you can decide if you want to buy the individual table.The Walking Dead Pinball will be available today on PS3, PS4, and PS Vita. While PC, Mac, Xbox 360, and Xbox One will be able to download the table tomorrow. Android and iOS devices will follow the next day on August 28th. As usual with any digital release the storefronts take a while to update. Just keep checking and the DLC should show up on the store or within a couple of hours.