The latest news in the world of video games at Attack of the Fanboy
August 21st, 2014 by William Schwartz 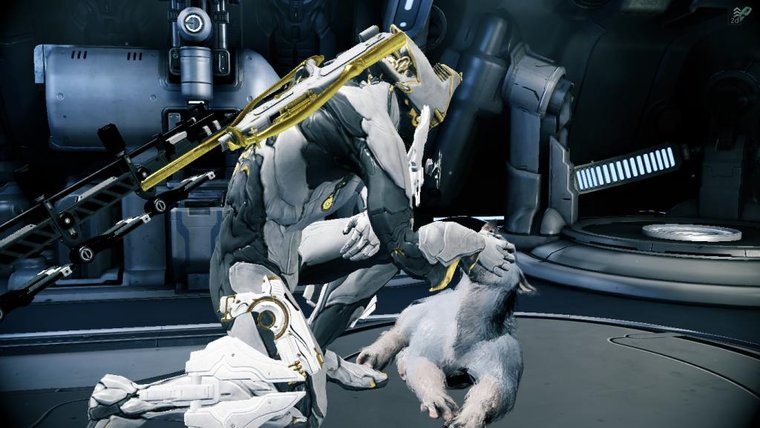 Trailing at just over a month behind, the PlayStation 4 version of Warframe has just received Update 14: The Mad Cephalon. This massive update brings a re-tooled user interface, redesigned menus, a new Warframe, new weapons and, most importantly, pets. These pets, called Kubrows, can be hatched once their egg is obtained, allowing you to develop and mod your own killer, four-legged companion. They’re definitely one of the most exciting changes to hit the free-to-play title in a while. I’m sure every Tenno will greatly enjoy tailoring their warbeast to their specific needs, whether that be stealth or direct combat. You can take a look at the changelog below for a full rundown of the latest additions and tweaks.

NEW USER EXPERIENCE – A meaningful Quest walks new players through Warframe, providing essential information on gameplay, lore, game modes and menus. Experience a re-imagined user interface and menus. Players have a place in the Solar System aboard their personal spacecraft, The Liset. Upon completing the ‘Vor’s Prize’ Quest, major systems, menus, and components can be accessed through devices aboard the ship!

KUBROWS – A new Quest unlocks a Genetic Foundry used for breeding biological specimens on your ship! Breed a Kubrow by collecting a Kubrow egg and incubating it in the Genetic Foundry. Different Kubrow personality types have different combat and non-combat abilities. Make your Kubrow more combat effective by caring for it and equipping powerful link mods. Create genetic imprints of your Kubrow that you can trade with fellow Tenno and combine to create your perfect pet!

NEW WARFRAME – A master of illusion, Mirage confounds the enemy in a spectacle of style and power. Mirage ‘s powers include:
Hall of Mirrors – Mirage creates an entourage of doppelgangers to distract and confuse the enemy.
Sleight of Hand – A natural prankster, Mirage booby-traps nearby objects.
Eclipse – Standing in light, Mirage becomes the main attraction, dealing heavy damage — while the shadows make Mirage difficult to track and even harder to hurt.
Prism – Fires an energy orb that shoots lasers in all directions. Activating again detonates the bomb, blinding nearby foes.

NEW DARK SECTORS CONFLICT – Introducing a new player-versus-player game mode to replace the existing Solar Rails conflict game mode. Choose which Clan or Alliance you wish to support and play the role of Attacker or Defender on a multi-staged objective mission! Up to four human players per side, with empty player slots auto-filled by Spectres.

SILVA AND AEGIS – a Sword and Board style weapon created from the concept of our Community Melee Design Contest Winner – SilverBones.

QUANTA – Originally designed for mineral extraction on large asteroids, this tool has recently been adapted for deadly military purposes.

VENKA – A Tenno-based Claw Weapon capable of rending both flesh and metal alike!

ILIAC SYANDANA AND ARMOR SET – Make your mark in an Infested-themed cosmetic set.

PYRA SYANDANA – A flaming remnant of the Orokin Elite.

DENDRA ARMOR – Derived from Corpus protective technologies this armor will add even more energy flare to your Warframe!

In addition to this news, Digital Extremes noted that their popular free-to-play game has managed to attract 10 million registered users. This number is a combined total between the PC and PlayStation 4 communities. With Waframe launching on Xbox One on September 3rd, the user base should see a noticeable boost past this milestone in the very near future.