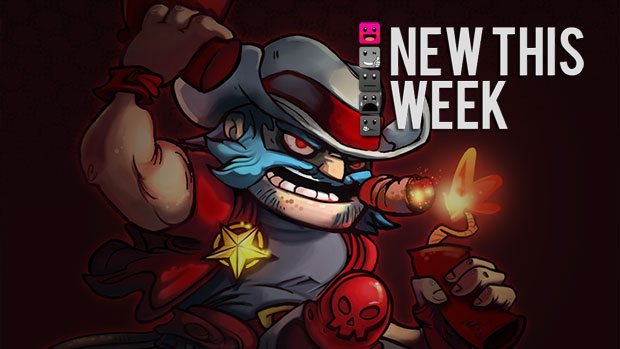 Awesomenauts – PC – The year is 3587. Conflict spans the stars as huge robot armies are locked in an enduring stalemate. In their bid for galactic supremacy, they call upon the most powerful group of mercenaries in the universe: the Awesomenauts! Awesomenauts is a MOBA fitted into the form of an accessible 3-on-3 action platformer.

Orcs Must Die 2 – PC – You’ve tossed, burned and sliced them by the thousands – now orcs must die more than ever before! Grab a friend and slay orcs in untold numbers in this sequel to the 2011 AIAS Strategy Game of the Year from Robot Entertainment. Leap back into the fray as a powerful War Mage or crafty Sorceress.

Risen 2: Dark Waters – Xbox 360, PlayStation 3 – Set several years after the end of Risen, raging titans have devastated the world and pushed humanity to the brink of existence. Subsequently, monstrous creatures have risen from the watery depths of the sea and their attacks have brought all seafaring to a grinding halt. The hero, now a member of the Inquisition, is sent out to find out how to stop the chaos caused by these creatures from the deep. His quest begins with rumors that the pirates who frequent the southern islands are the only ones who know a way to get rid of the creatures once and for all and end their reign of terror.

Deadlight – Xbox 360 – The world has ended. There is no hope. No new beginning. Only the survivors. DEADLIGHT follows the journey of Randall Wayne, a man searching for his family across Seattle during the aftermath of a 1980s event that has decimated life on earth. This visually stunning Cinematic Survival Platformer will challenge you to run, jump, climb, and struggle for your life as you look for answers and the ones you love.

Kingdom Hearts: Dream Drop Distance – In preparation for an impending threat, Sora and Riku enter the Sleeping Worlds to take the Mark of Mastery exam. They will face new enemies and make new friends in worlds they’ve never set foot in. If they can successfully unlock seven Sleeping Keyholes and return to their world, they will retrieve a great power and be deemed true Keyblade Masters.

Myst – 3DS – You will embark on a wondrous voyage as The Stranger, and explore an island of intrigue as you uncover clues about your surroundings and the quest you must take. Now the most well-known adventure game in the world comes alive in the new 3D version of this classic story! A book written by a potentially paranoid man named Atrus serves as a portal to an otherworldly place, the island of Myst, in this atmospheric adventure game by developer Cyan. By exploring the island, you will eventually stumble upon an assortment of puzzles in the form of intricate contraptions, whose secrets can only be unlocked after discovering evidence of their nature.