New This Week in Video Games | Get All the Coins in… Dark Souls?

The latest news in the world of video games at Attack of the Fanboy
August 19th, 2012 by William Schwartz 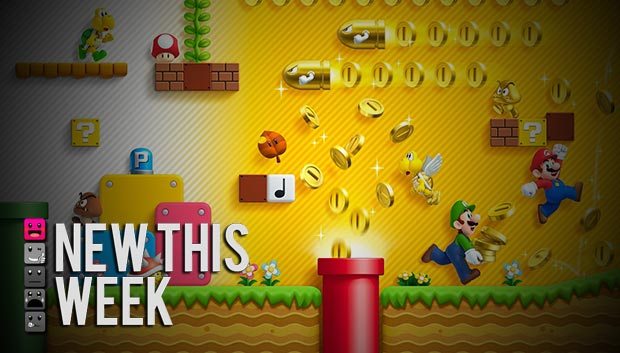 Dark Souls Prepare to Die Edition – PC – A dark fantasy universe, tense dungeon crawling, fearsome enemy encounters and unique online interactions. Dark Souls is a spiritual successor to Demon’s, not a sequel. Prepare for a new, despair-inducing world, with a vast, fully-explorable horizon and vertically-oriented landforms. Dark Souls: Prepare to Die Edition includes an untold chapter in the world of Lordan. Sent back to the past, the player will discover the story when Knight Artorias still lives.

New Super Mario Bros. 2 – Nintendo 3DS – Feel the rush of discovering tons of coins in brand new coin-rich worlds with the new Gold Mario, gold pipes, gold Fire Flowers, new block head Mario that transforms enemies into coins, and while challenging your friends in the new Coin Rush Mode. Can you get one million coins?

Transformers: Fall of Cybertron – Xbox 360, PlayStation 3, PC – Transformers: Fall of Cybertron is a third-person shooter that returns players to the Transformer’s planet of Cybertron for the final battles of the legendary war that preceded their arrival on Earth. The game continues the story of the earlier game, Transformers: War for Cybertron. Players experience the war from both the Autobot and Decepticon point of view, and utilize new powerful transformer types. Additional features include: epic large scale battles, character specific abilities, character customization, improved enemy AI, varied mission play, and online multiplayer.

Legasista – PS3 – This post-apocalyptic 2D-styled dungeon crawler — NIS America is describing it as a “survival action-RPG” — takes place in a far-flung future where science has been forgotten and technology is treated with superstitious awe. The gameplay and concept will be familiar to fans of the ClaDun series, but Legasista ups the ante by enabling you to customize your weapon and skills, creating thousands of attack combos.

Metal Gear Solid 2: Sons of Liberty HD – PlayStation 3, PS Vita – Technological data on the nuclear-armed walking tank, Metal Gear, leaks onto the black market. The legendary hero, Solid Snake, sets out in pursuit of a tanker carrying a new Metal Gear prototype. But Snake falls into a trap and is believed lost along with the tanker at the bottom of the Hudson River.

Metal Gear Solid 3: Snake Eater – PlayStation 3, PS Vita – Set during the Cold War of the 60s, METAL GEAR SOLID 3: SNAKE EATER sees series hero Snake infiltrating the Soviet jungle to bring back a scientist being held against his will. Starting on the outskirts of a military base, the player must use Snake’s stealth skills along with the foliage and shade that the jungle offers as cover to infiltrate unseen.

Home / Game News / New This Week in Video Games | Get All the Coins in… Dark Souls?