New This Week in Video Games | The Dark Knight Returns 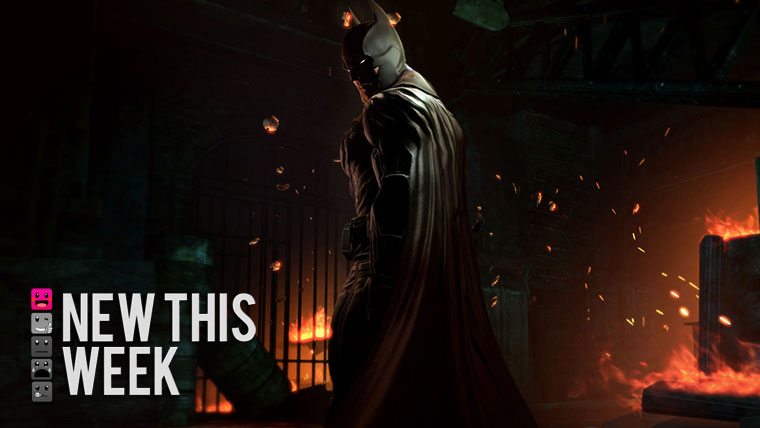 Batman: Arkham Origins – Xbox 360, PlayStation 3, PC, Wii U – Batman: Arkham Origins features an expanded Gotham City and introduces an original prequel storyline set several years before the events of Batman: Arkham Asylum and Batman: Arkham City, the first two critically acclaimed games of the franchise; Taking place before the rise of Gotham City’s most dangerous criminals, the game showcases a young and unrefined Batman as he faces a defining moment in his early career as a crime fighter that sets his path to becoming the Dark Knight; As the story unfolds, players will meet many important characters for the first time and forge key relationships

Lego Marvel Super Heroes – Xbox 360, PlayStation 3, PC, Wii U, 3DS, PS Vita – LEGO Marvel Super Heroes features an original story crossing all the Marvel families. Players take control of Iron Man, Spider-Man, The Hulk, Captain America, Wolverine and many more Marvel characters as they try to stop Loki and a host of other Marvel villains from assembling a Super weapon which they could use to control the Earth. Players will chase down Comic Bricks as they travel across a LEGO New York and visit key locations from the Marvel universe such as Stark Tower, Asteroid M, an abandoned Hydra Base and the X-Mansion.

Naruto Shippuden: Ultimate Ninja Storm 3 — Full Burst – Xbox 360, PlayStation 3, PC – Live the 4th Great Ninja War and its overpowering boss fights or defy your friends in ultra dynamic online and offline ninja confrontations! Originally released in March 2013 for Xbox 360 and PlayStation 3 to wide critical and fan acclaim, NARUTO SHIPPUDEN: Ultimate Ninja STORM 3 has been given a thorough overhaul for its FULL BURST comeback! The “ULTIMATE” Ninja Storm 3 edition features many new enhancements and additional content, including the feverishly anticipated chapter where Sasuke and Itachi take on Kabuto in a nail-biting confrontation.

Raven’s Cry – Xbox 360, PlayStation 3, PC – “Raven’s Cry” is a mature third person action adventure title that takes players to the beautiful but deadly Caribbean islands in the 17th century. Besides its dark parable on revenge, Raven’s Cry offers fierce, eclectic naval battles and a now free to explore open world as the main character Christopher Raven carves a bloody swath of terror on both land and sea, leaving no moral boundary uncrossed on his hunt for Captain Neville and his brutal band of pirates.

Wii Party U – Wii U – Have fun together with this new medley of living room party games! Four game modes change up the way you play with the Wii Remote controllers* and GamePad. Attend a game show that tests how well others know you, or dance together to familiar tunes in House Party mode. If you’re just looking for a short burst of fun, look no further than Minigames mode, which features tournament brackets and a solo dojo fest. Try TV Party if you’re in the mood for a board game. You can also shut the TV off and play two-player tabletop games exclusively on the GamePad, which range from foosball to baseball to slot-car racing.

SpongeBob SquarePants – Wii U, Wii, 3DS – The silliest sponge in the sea swims back to video games in an all new adventure! Grab your friends for an adventure like no other! Plankton and his new legion of evil robots have destroyed the Krusty Krab and stolen the safe that houses the famous Krabby Patty formula. It’s up to you and your friends to locate the hidden keys before the secret is lost forever!

Magrunner: Dark Pulse – PlayStation 3 – Use your Magtech glove to magnetically polarize and manipulate objects in the environment to survive and surpass challenging puzzles. Your reflexes and ingenuity will be pushed to their limits as you make your way through 40+ immense and dangerous levels, including high-tech training rooms and the endless chasms of the lost cosmos, on a path to confront the horrendous creatures of Cthulhu!

How to Survive – Xbox 360, PlayStation 3, PC – You are shipwrecked on an isolated island, a desperate castaway in a total freakshow world. How will you survive? Collect the pages of a Survival Guide and figure it out, of course! Find food, water, and shelter before you perish. Uh oh, is it getting dark? Figure out how to get through the night! While you’re at it, gather up some of this awesome stuff and piece together over 100 handmade weapons and tools.

Sonic Lost World – Wii U, 3DS – Sonic moves like never before. Vault over obstacles, free run up and along walls and sky dive between islands at lightning speed. Plus the Spin Dash is back.

Just Dance Kids 2014 – Xbox 360, PlayStation3, Wii U, Wii  – The coolest dance experience for kids is back, Just Dance Kids 2014 is now on Wii! Featuring over 30 fun and crazy dance routines to kids favorite songs, including hits from today’s most popular artists, TV shows and movies. Just Dance Kids 2014 gets kids of all ages up and dancing with colorful graphics, super-fun dance moves, and kid-friendly gameplay!

Phoenix Wright: Ace Attorney — Dual Destinies – 3DS – Dual Destinies looks to continue the style of gameplay from previous installments, in which the player must utilize evidence and find contradictions in witness statements to prove their client innocent. Like previous installments, gameplay is split up between Investigations, in which players find evidence and question witnesses, and Trials, where they must use the evidence to expose contradictions.