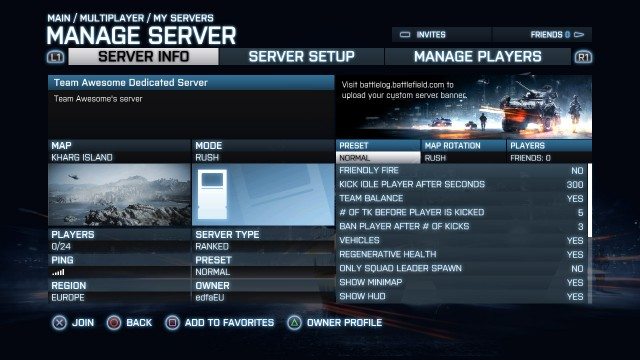 The amount of time I’ve spent on the Caspian Border map spawn camping the jet area is probably pretty embarrassing. But truthfully, the only reason I do it to a ridiculous extent is that jets in Battlefield 3 are generally perceived to be pretty good weapons that can influence the outcome of a game. When you have a complete idiot who spawns, runs straight for a jet, and then proceeds to fire shells into trees and kamikaze-attack a random space of ground, a game of BF3 can get tiresome very quickly. If only there were a way for you 360 gamers to prevent these morons from joining your game. Well, thanks to the massive Battlefield 3 update arriving today, there’s a way to do just that.

Of course, you’ll have to pay for it (Come on now, this is EA we’re talking about!). And no, $60 a year for Xbox Live Gold apparently doesn’t cover it. With the arrival of the update, 360 players will now have the opportunity to rent Battlefield 3 servers of their very own. This option has of course been available on PCs and was in fact introduced to PS3 players last week.

The cost of an Xbox server rental starts at $1.50 (or 120 MS Points) for a dayand $25 (2000 MS Points) for the month. Should you choose to rent a server, you’ll be given almighty admin powers that will allow you to name specific users as VIPs (Which lets them jump to the top of the queue) and of course, the ever-entertaining ability of kicking and banning idiots who don’t have their virtual pilot license.

The new patch, according to DICE and EA, “includes gameplay tweaks, improvements, and balances, many suggested by you, our loyal community.” It will address some general gameplay issues as well as vehicle fixes and tweaks for a variety of equipment such as weapons, scopes, bipods, foregrip, laser sight, suppressors, and gadgets.