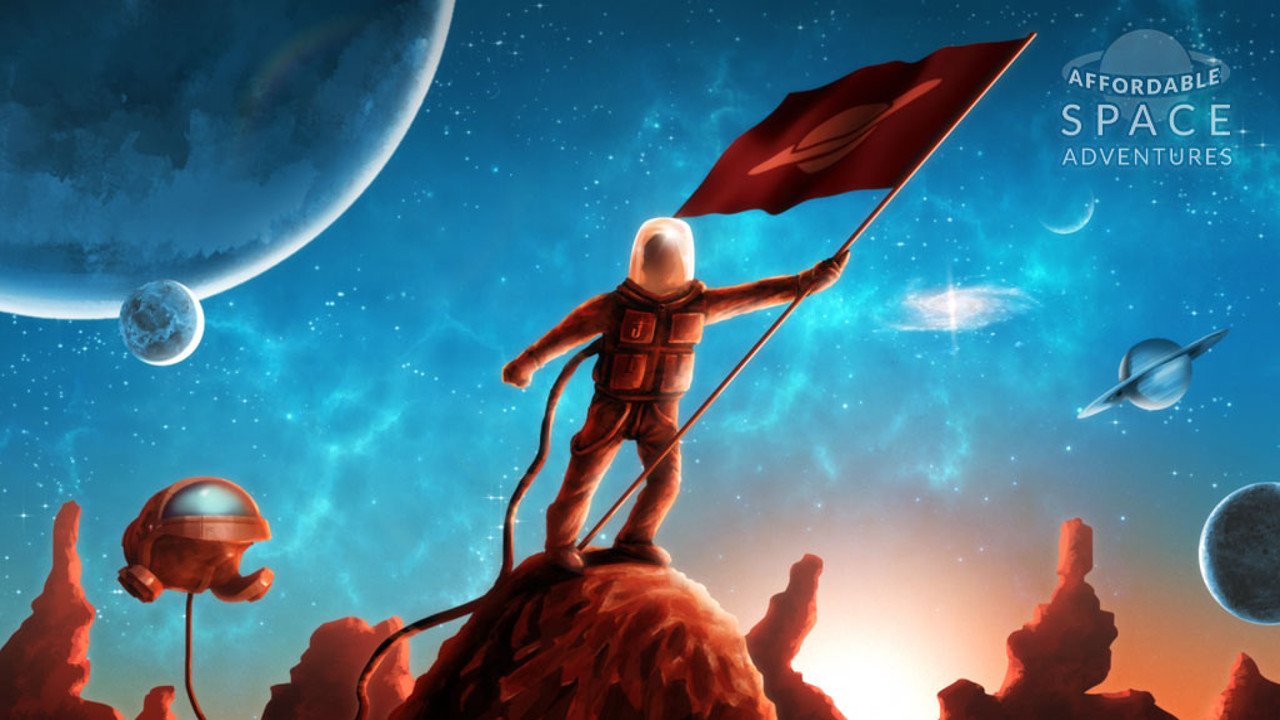 Ever since it launched in 2012 the Wii U has struggled to justify itself and the Gamepad that acts as its core gameplay innovation. Nintendoland, ZombiU, and a few other games put up a good effort, but since then there have been few games that seemed to truly work only on the two screen console. That has changed with the release of Affordable Space Adventure by Knapnok Games, an extremely enjoyable 2D adventure-puzzle game that will leave you with just one question: why couldn’t this have come out sooner?

Affordable Space Adventures places you into a Uexplore spaceship on its way to the alien planet Spectaculon. You’re all set to go on a safe and fun adventure when, of course, things go horribly wrong. Your ship is damaged, and the planet is not at all what was described by the video brochure. You’ll have to maintain the systems on your cheaply built ship, survive the elements, and figure out how to deal with various hostile foes as you search for any means of rescue. 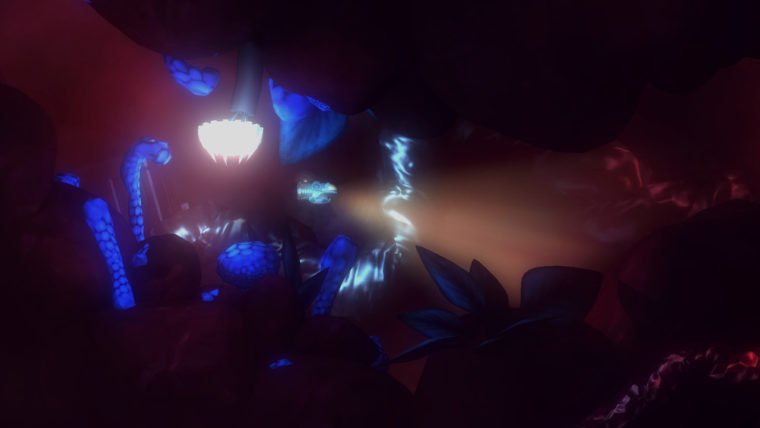 To do this you will fly around in your Uexplore ship, which is attempting to slowly repair itself from the damage done during the crash. Using the Wii U Gamepad you will manage the various systems of the ship, such as the fuel and electric engines, the scanner, the anti-gravity generator, and a few more. This “Heads Down Display” is the central focus of Affordable Space Adventures, and it works surprisingly well.

The fact that it all works so well is a testament to the fact that the game is designed, from the ground up, for the Wii U

So few games on the Wii U have actually felt like they could only work on the system, but Affordable Space Adventures does just that. Using the Gamepad you can pull off tricky maneuvers like shutting off your anti-gravity, causing you to fall toward the ground, flip on the engine at the last second, and jam the throttle all the way up just in time to avoid a laser beam. This is just one example of many that will occur throughout Affordable Space Adventures. The game is built around navigational puzzles, which are themselves built around the Gamepad mechanics. The fact that it all works so well is a testament to the fact that the game is designed, from the ground up, for the Wii U.

The core gameplay consists of exploring various areas of the planet. These are sectioned off into distinct levels, with each level acting as a sort of puzzle unto itself. Players will need to use every system available to them if they want to solve the puzzle and move ahead. However, not everything is as simple as putting the right block in the right place. Enemies dot the landscape, and they actually factor heavily into the puzzle solving mechanics. 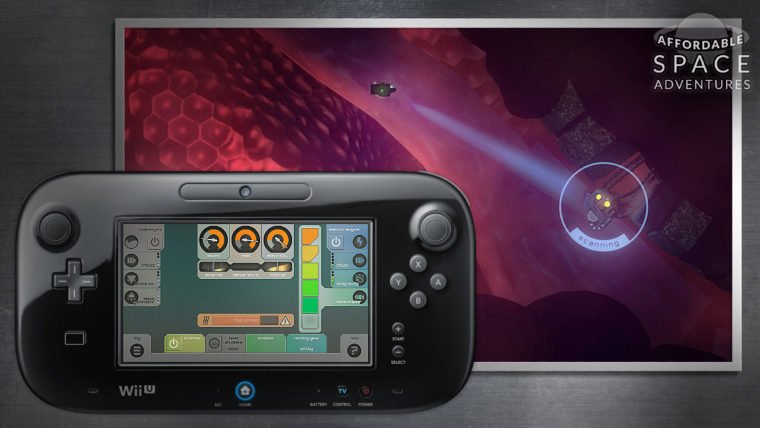 Once scanned you will see what causes the enemies to react to your presence, as well as the range at which they will attack. Heat, electricity, and sound all have meters displayed on the Gamepad, and you’ll have to keep them below the red line if you want to be able to sneak past these foes. Of course, sometimes you can’t get by with just shutting down extraneous systems. One method that can be used fairly often is to shut down everything except the anti-gravity system, but only after building up enough momentum to make it out of the enemy’s range. This allows the ship to sail past undetected, but with no control over its direction beyond the initial engine burst.

These enemies are also one of the few issues that might come up during player’s time with Affordable Space Adventures. Too often you will come around a corner or into a new area, only to run face first into an enemy, who immediately shoots you, sending you back to the nearest checkpoint. It just feels cheap to have enemies that have ranges that extend right to the point where they appear on camera. Luckily, the checkpoint system in Affordable Space Adventures is fantastic, making this simply a minor inconvenience, rather than a true detriment to the experience.

As the game progresses, more and more systems become unlocked, allowing for more variety in the navigational puzzles and stealth gameplay. Near the end of the game, players will find themselves wracking their brain to figure out what systems need to be shut down, and which are crucial to make it through. And just as you become reliant on some of these to get you past the enemies, the game will take them away in fun and creative ways that will test your piloting abilities once more. 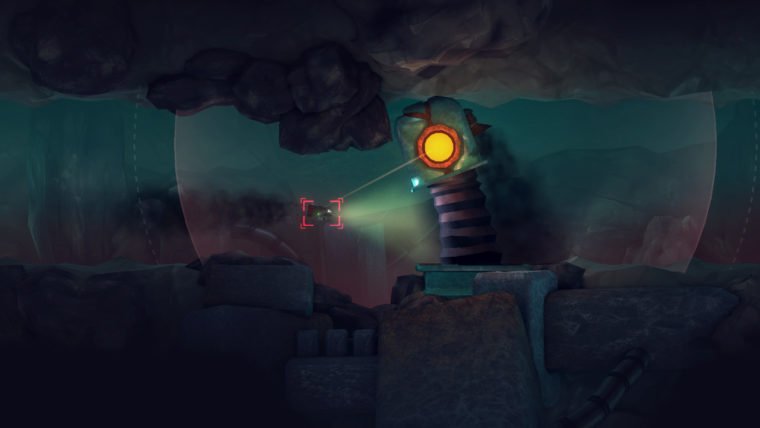 Affordable Space Adventures is the sort of small, indie game that is so full of charm that it entirely envelopes the player in the experience. There isn’t much story beyond the necessary basics, but the universe that Knapnok Games has built using just a few cutscenes, and a whole lot of subtle implication, is fascinating and deserves further exploration. The atmosphere, despite a few graphical quibbles, is also stellar, as you transition from one location to another, yet the world always feels vast, desolate, and foreboding. You never get the sense that you are a large part of this world, instead you exist as a tiny piece of a larger puzzle, and you’re just trying to make your way through without dying.

Of course, you don’t have to be completely alone on this adventure if you don’t want to be. Affordable Space Adventures offers some of the best, and most unique cooperative play available on consoles. Up to two players can join in the fun, using either wiimotes & nunchucks, or a Pro controller. They will then take over aspects of controlling the ship, with one player navigating, and the other controlling the light, flare gun, and scanner. The third player controls the various ship systems on the Gamepad as normal, just without having to also move the ship around at the same time. Communication is the main element that will separate successful crews from unsuccessful ones. However, whether you’re blazing through the puzzles, shouting commands between each other with ease, or getting blown up over and over again there is always a great sense of fun to the precedings.

Affordable Space Adventures truly takes advantage of the uniqueness of the Wii U, and it is all the better for it. Few games have felt this distinct, while also remaining fun and enjoyable. The campaign doesn’t last too long, but what time you can spend in it will truly satisfy, and if you bring some friends along it only gets better. If you own a Wii U and have been starving for new games, then you owe it to yourself to pick up Affordable Space Adventures.