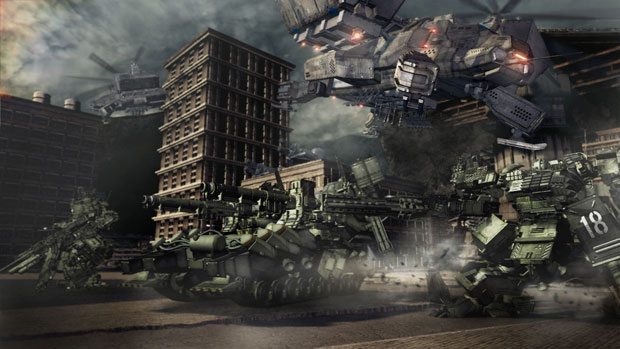 The Armored Core franchise has spanned well over a decade now, starting out on the PlayStation then moving on to the PlayStation 2 with multiple iterations of titles along the way.  This generation rang in a new era for Armored Core, but From Software’s most recent release is by far its most ambitious.  The developer has done some interesting things in the multiplayer space,  and Armored Core V has a suite of online options that are rivaled by few. If  persistent all-out mech warfare is what you crave, Armored Core V is flush in this department.  If you’re ready to dish out justice in a fully customizable monstrosity of a mech, this is probably the game you’ve been waiting for.

For long time fans of the franchise, Armored Core V will put you in semi-familiar territory.  The franchise’s signature core elements remain intact with the dash-based gameplay and customization elements that you’ve come accustomed to over the years.  A more tactical game than previous releases, Armored Core V features many levels in city scape environments where your smaller mech will use maneuverability as well as weaponry to get the job done, in any of the game’s ten story missions and numerous side objectives.  But if you’re going into Armored Core V for just the story mode and side missions, you’re missing the picture completely.

Armored Core V is set in a persistent online world.  Which I’ll be quite honest, can be a bit overwhelming with it’s rather large feature set.  You’ll have the option to join a team or play as a lone wolf  but its team based focus is really where the meat of Armored Core V is.  It’s actually quite obscene how much detail that From Software has packed into the multiplayer feature set in Armored Core V.  Joining a team will allow you to participate in an all-out conquest mode, it’s a truly massively multiplayer mode on consoles.  It’s been tried before with games like Chrome Hounds, but never has it played out as well as it does in Armored Core V.

In Armored Core V the game world is broken down into eight main regions, these regions are sub-divided into thousands of territories where your team can complete objectives and attempt to conquer.  Conquer the most territories in a region, and your team has become the region’s leader and your flag will fly there for all to see.  As territories are won, they are also lost.  Region leaders can set up defense systems allowing the AI to defend key areas even if noone from your team is online to help defend the house.  Measured by Endurance Value, subsequent losses in a specific territory will make it vulnerable to a full out Conquest Mission where players from another team can challenge for outright control of a territory.  Armored Core V definitely has an ambitious real time strategy angle to it,  but it will need a cooperative online community to be successful.

As you and your team are mashing through the front lines of enemy defenses, you’ll also be gaining and losing points in the process.  Winning or losing a specific battle will be the determining factor as to whether you gain or lose points, and these points can be used for a number of different things.  Defending your own territories, expanding battlefield workshop capacities, and of course upgrading your units.  Armored Core V again features a large customizable set of components for your mech.  Some aesthetic features like paint and body type of the mech can be changed, as well as configurable weapon slots that become more powerful as you can afford to upgrade them.  Within the team based structure of the game you can trade parts with other members of your team, or outright give your brothers in arms the necessary equipment to fight a better fight.

Once on a team, you’ll constantly see the progress of your comrades and in many cases you can just join on the fly if mission parameters allow and there are available player slots.  If fighting solo, you can also call on mercenaries.  These mercenaries are real players who have joined a queue to be hired on by the next requesting party.  If successful, a portion of your rewards for completing a mission will go to the mercenary.  It’s an interesting twist, and could prove interesting especially once the game releases and the full community takes hold of the online war.

Outside of this robust feature set of online options, Armored Core V feels, well, like an Armored Core game.  Graphics don’t feel like they were improved as much as the online infrastructure has been, and at times, some of the single player missions can feel a little mundane. It kind of feels like Dark Souls in a way. It’s not the best looking game, nor does it have the best controls, but what it offers in exchange is a much richer and deeper online experience than any game I can remember in recent memory. If you dig real time strategy, and the possibility of a persistent online experience where war is raging whether you are online or off, you’d do well to check out Armored Core V.