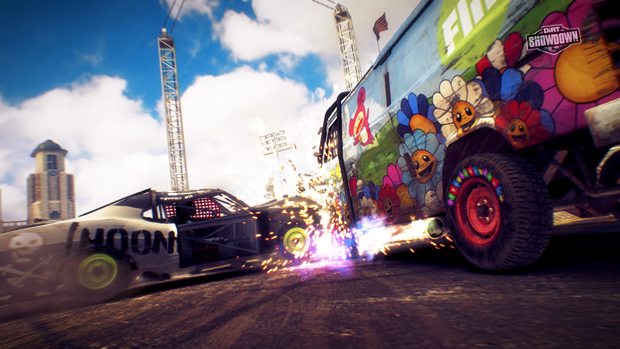 When last year’s Dirt 3 arrived, we were impressed to say the least.  Our review can testify to that.  Hell, it was deemed the best racing game of 2011 by us as well.  Codemasters was right on key with the fast paced arcade racing of DiRT 3,  and Gymkhana events sprinkled in to give it a great deal of variety.  Fast forward one year, and Codemasters Racing has just released another entry into the DiRT franchise: DiRT: Showdown.

Showdown is a bit of a different animal.  Standard racing returns,  as well as Gymkhana, but the game is simply more geared towards combative racing than it is the technical offroad driving that the series is rooted in.  With DiRT 3, Codemasters moved away from core foundation for the franchise, and DiRT Showdown takes a closer step towards all-out extreme racing.

What hasn’t changed is Codemasters’ penchant for making quality games.

What hasn’t changed in the transition is Codemasters’ penchant for making quality games.  Slick presentation and interfaces meld well with colorful graphics and an up-beat soundtrack.  On the racetrack though,  fans rooting you on in a larger than life entertainment atmosphere in locales across the world,  look and sound equally good.   DiRT Showdown is a direct spin-off and good use of DiRT 3’s Engine, so it’s pretty hard to miss in these areas for Codemasters.

Many of the features that DiRT 3 incorporated make their return in Showdown.  Uploading your videos to YouTube is one of those features. It  allows for the sharing of your best or worst in-game moments in a seamlessly integrated fashion in UI.  Further,  the inclusion of RACENET allows you to issue challenges to friends across all of Codemasters’ racing titles.  Completing these challenges will allow you to earn extra cash, which can be used to better you garage, upgrade vehicles, and  other features.

On the track, Codemasters Racing integrates a wider set of racing and objective style gamemodes in its single player career mode.  You’ll be racing for place, or just tasked with racking up points, set loose to do as much damage to your opponents as possible.  There’s a nice mix of modes and tracks in the single player career, add in the experience and unlockables that can be earned and the single player portion of DiRT Showdown is quite robust.

Nothing in the single player campaign can prepare you for the fun to be had in multiplayer however.  The combat racing takes on a whole new meaning when you arrive online.  Seemingly built for those types of players that can’t get enough of ramming their opponents, DiRT Showdown rewards you for such behavior.  In many game modes, that’s the overall objective.  Game modes like Knock Out will put racers on a pedestal with the sole objective being to ram other cars off of it.  It’s hectic, fast-paced, and most importantly, fun.  It’s kind of like most of the many game modes found in DiRT Showdown’s multiplayer. They’re fast paced affairs that allow you to get in, get out, and have a much fun as you can in the short amount of time.

Nothing in the single player can prepare you for the fun to be had in multiplayer.

Even more so than the single player campaign, multiplayer has a ton of different game modes that appear to be derived from popular multiplayer match types in shooters.  Capture the flags, Oddball, Deathmatch, and others are a great time with friends, or with a random party via your network of choice.  DiRT Showdown probably shines brightest in its multiplayer modes, offering a repreive for the monotony of traditional racing titles and their limited scope of game modes.

There’s just a wealth of content in this latest title.  From split-screen multiplayer to joyride modes, there’s plenty of things to do and see in DiRT Showdown that aren’t just rehashed content from DiRT 3.  If you were thinking that DiRT Showdown is just a beefed up remake of Codemasters’ last game, you would be sadly mistaken. While it certainly bares some resemblance to the 2011 title, this multiplayer-centric offering is a completely new experience.  It has all of the trimmings that made DiRT 3 THE stand-out racing title of 2011, but cranks up the intensity.  With that, it offers more replay value for the multiplayer racing fan, and more fun in the process.