The latest news in the world of video games at Attack of the Fanboy
May 30th, 2016 by Dean James The shooter genre may be more often linked to the FPS style games these days, but back in the 8-bit and 16-bit era, they were scrolling shooters that were known for their difficulty. Downwell gave players a journey back to this now seemingly ancient era when it came out last year for PC and iOS, but now it has released in its best form so far on PS4 and PS Vita.

While typical shooters feature a scrolling screen that goes left to right, Downwell takes its title very literally and goes about it with a different, yet still familiar approach. The game starts off with you at the top of a well, which the playable character decides to descend down, and that is where the adventure begins that spans four different worlds and a final boss fight.

Each of the four worlds that you will traverse will feature a different theme, which is seen both in their visual design and in the enemies you will come across. These start off pretty simple with an architecture that feels like it would really be the inside of a well. These get a little more crazy the deeper you go, especially with the water-based third world that even adds in breathing mechanics like Sonic 3, with you able to obtain more air by opening clams.

The disappointing thing here is that you will be replaying the most basic levels a lot more often, as the others take a lot of practice to get to due to the relatively high level of difficulty, especially once you unlock Hard Mode. With cheap AI from the enemies at certain points, this can start to get obliterated all of a sudden, even if you had been cruising up to that point. 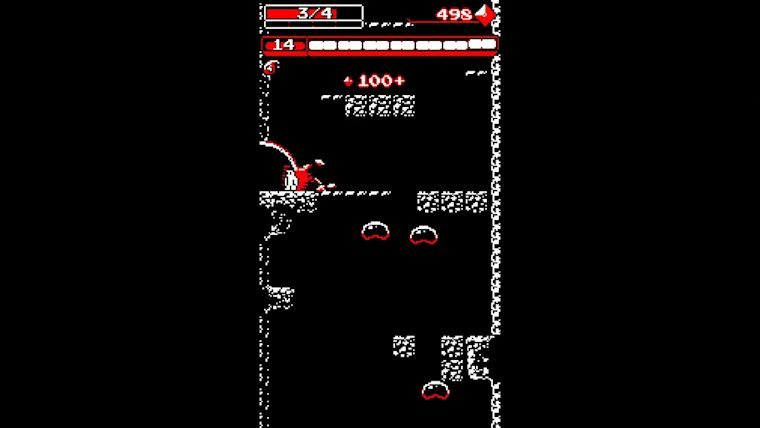 The visuals themselves are taken straight from the 8-bit era, which fits perfectly for a game like this. The environments and enemies are all well designed to where you can tell them apart pretty well, even when the screen can get pretty jumbled at times. These enemies are mostly tailored to the specific worlds in which they are found, such as having ghost enemies in the Catacomb stages, though some such as the Metroid-looking bubbles are just kind of odd.

The gameplay found in Downwell is very simple, with your goal being to just keep moving downward while trying to stay alive. The controls are pretty limited as well, with you only being able to move left and right, jump, and fire your gunboots. These gunboots have two purposes in the game, as you will be using them to slow down your descent or to destroy enemies. A majority of the enemies can also be destroyed by jumping on them, like Mario, but some cannot be touched at all, which requires the use of your gunboots.

The gunboots start off pretty basic with a downward shooting motion that has eight shots in it at one time. However, this will continuously be able to be switched out for alternate weapons within little caves that can be found on the sides of the screen. These show up throughout each level and either house a different weapon, a gem deposit, or a shop, so they can be very important. These will provide you with different upgrades like a shotgun or laser gunboot, which each have their strengths and weaknesses. The end of each subsection will provide you with another type of upgrade from a group of three, such as one that sucks in nearby gems, extends your firing range, or a card that discounts your shop purchases.

The shops will play an integral part throughout the game, as you will very likely need them to restore health throughout. There will be some items that just restore health, but the more important ones will actually add onto your overall health or charge meters. This makes gem collecting a big part of Downwell as you make your way deeper, which can be earned by destroying enemies or special blocks that house gems. Collecting enough of these in a short period of time will also activate the Gem High ability that gives your gunboots more power and range temporarily. 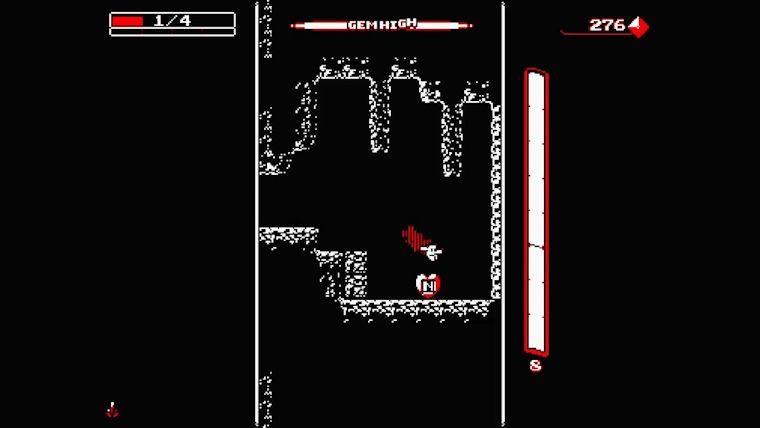 Collecting gems also will help you to unlock a number of different styles and palettes for use in the game. The styles alter the game just a little bit, such as the heavier Boulder style that provides you with more starting health, but in return only provides you with two upgrade options at the end of each stage instead of three. There are only five of these to choose from, so they are unlocked less frequently, but much more often you will be unlocking the new palettes. The palettes switch up the color scheme in Downwell, with some being just utilizing blue instead of red in places, while others are more detailed. Two of these in particular that stand out, though actually more difficult, are the GBOY and VBOY palettes that change the game to look like an original Game Boy or Virtual Boy game.

Visuals themselves are taken straight from the 8-bit era

Beyond just being a shooter, Downwell can also be classified as a roguelike game, which games like Spelunky and Binding of Isaac have made even more popular in recent years. This means that every single level in the game will be completely randomized in structure and layout, so that no single experience while playing will be the same. This adds a lot more replayability to the game, as every time playing will feel different from the others, which helps to avoid fatigue. This random nature of the game does attribute to the aforementioned high level of difficulty in the game, so there will be no patterns or anything that players can really memorize to be better prepared.

As Downwell is focused on moving downward through a fairly narrow pathway, most of the actual screen is not being used at all. The area of the screen in which you are navigating will take up only about a third of the display, with the rest having nothing more than your life total and gunboot meter. This is actually what perhaps makes the PS Vita version the overall most attractive option, as you can alter the settings and use the entire screen. 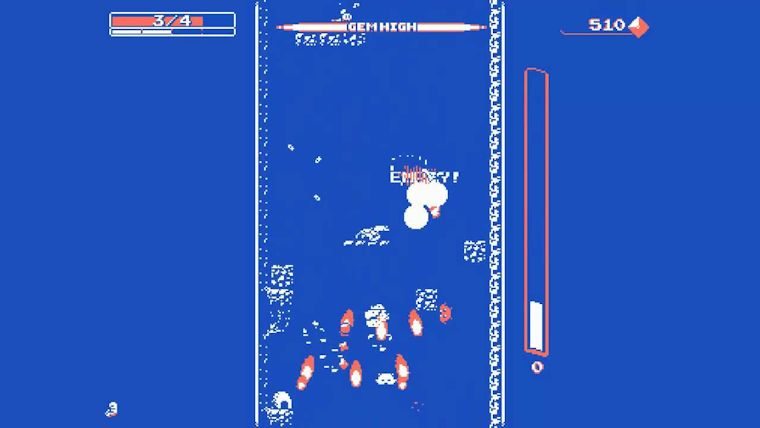 Both the PS4 and PS Vita versions of Downwell feature a setting called angle that let you turn the game on its side. This does not work at all on the PS4, as you will have to tilt you head sideways to play and it just makes it basically impossible. However, with the Vita, you can just turn the handheld on its side and switch up the controls to play it with ease. This was a fantastic option to include in the Vita version, though it’s kind of odd that the PS4 version has it included when it really can’t be used at all.

Downwell was well suited for mobile platforms when it released last year, but the addition of physical buttons on both PS4 and PS Vita have made the game even better. The game truly feels like a classic NES game both in aesthetics and in difficulty, which is paired with incredibly addictive gameplay. While those who have played the game before won’t find anything new content wise to help extend the length, cross-buy for PS4/Vita and a price tag under $5 make Downwell at least worth giving a try.