The latest news in the world of video games at Attack of the Fanboy
October 11th, 2016 by Kyle Hanson Remasters have become either a scourge on gaming, or a fantastic chance to catch up on old classics. Which one it is depends heavily on the game itself, and the gamer who is playing it. Do you have fond memories of the game that is getting the remaster treatment? Then the HD upgrade is probably pretty sweet, as long as it is done with a deft hand, improving what needs work and leaving in everything that made the game so great in the first place. Duke Nukem 3D: 20th Anniversary Edition World Tour rests firmly in this latter category, with Gearbox crafting another labor of love by remastering an FPS classic.

I won’t rehash the basics of Duke Nukem 3D. The game was a pioneer in the FPS genre, introducing many of the staples that we take for granted today. The game has been endlessly copied, mimicked, and referenced, and it arrived right alongside other classic titles in the genre, creating a new era in gaming. 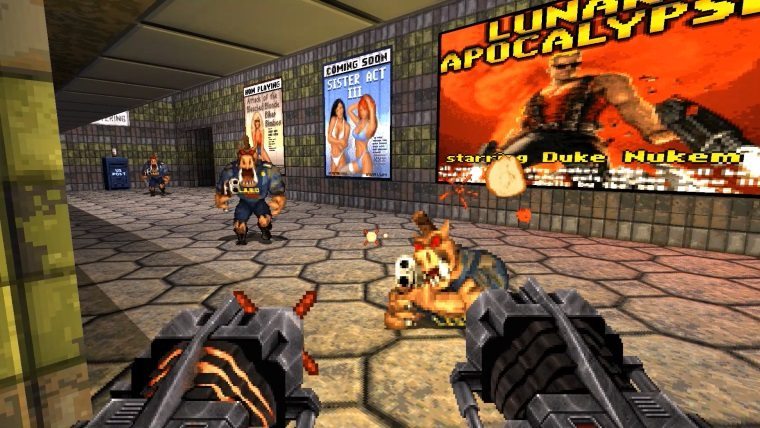 The story is all there, just as you might remember it. In case you haven’t played Duke Nukem 3D before, there still isn’t much to talk about. Aliens are invading a near-future Earth. It’s up to you, playing as the now iconic Duke Nukem, to stop them. To do this you’ll run around various environments, snatching up weapons, ammo, and power ups, blasting anything that gets in your way. And that’s pretty much it, Duke Nukem 3D is all about fast, frenetic violence and action, with the occasional one-liner spewed from the Duke.

This is the theme of this remaster, as the game is still running on its original engine, with new graphical elements pieced together over top of everything. At the press of a button you can flip from new rendered to old, much like the Halo remasters. This actually shows that there isn’t a massive difference between how the game used to look, and how it does in this new release. However, the touches here are subtle in all the right ways.

Duke Nukem 3D: 20th Anniversary Edition World Tour doesn’t look entirely new, and if it did fans would likely revolt. The game is supposed to look pixelated, and the enemies are supposed to be flat sprites that rotate as you move around them. This is how the original was, and so that is how this remaster is. Still, the redone textures, lighting, and other graphical elements do the job that many remasters fail at, it makes the game look exactly how it did in your head back when you played it two decades ago.

In terms of other additions, the audio has been redone in many places, and even added to in others. Gearbox was sure to get the original voice actor for Duke, Jon St. John to redo and create some new one-liners for the game. There’s also some new music, again composed by the original musician behind Duke Nukem 3D. If you’re sensing a pattern here, you’re not alone. Gearbox has put out a couple of remasters in this same vein, and they always show their dedication by bringing on as much of the original talent as possible. It works wonders, and the love behind the game is easily seen in the finished product.

The best place to see this is in the brand new audio commentary. Original creators Allen Blum III and Richard “Levelord” Gray sat down to play through the game, recording their thoughts along the way. It’s a great look at the design philosophy that went into the original classic, as well as an explanation for some of the hardships that they had to go through. It’s a great listen for fans of the game, or of game design in general, though it would have been nice if it wasn’t broken up into so many nodes. Finishing a complete train of thought can take far too much moving around and activation. It’s better for these when you can just hit the switch and keep playing.

Other than that, this is all classic Duke Nukem 3D, with all its good parts and bad. I’ve went over a few of the good ones, namely the frenetic action and the well designed and varied environments of the game. Some of the bad are exactly what you’d expect from a 20 year old game. FPS design has changed immensely in 20 years, players who aren’t used to the older style might easily become frustrated by things like having to wander levels looking for keys, and the antiquated controls for some actions. Even the original creators discuss this in the commentary at some points, explaining how things were simply done differently back then, and that even they might prefer the current design philosophy over their own.

Luckily Duke Nukem 3D: 20th Anniversary Edition World Tour has a lot of new stuff added on top to help you deal with these things. The best feature is the rewind ability. This lets you go back to almost any point from before your death. This was carried over from a previous re-release of the game, but it’s still a fantastic addition to the experience, and helps soothe some of the older mechanics rough edges.

One final thing that’s worth mentioning is that Duke Nukem 3D: 20th Anniversary Edition World Tour also features an improved multiplayer suite. While you might not devote as much time to this as you would the new Call of Duty, Battlefield, or Halo title, there is some classic fun to be had here. Gearbox even managed to work in AI bots in the multiplayer, making for a great experience for those without many friends to play with.

Duke Nukem 3D: 20th Anniversary Edition World Tour is a fantastic remaster of a true FPS classic. Doing exactly what a good remaster should, this re-release improves in many areas that needed it, while leaving in others; warts and all. The new graphics, sound, commentary, and other features are all cherries on top of what is easily the definitive version of this seminal title.