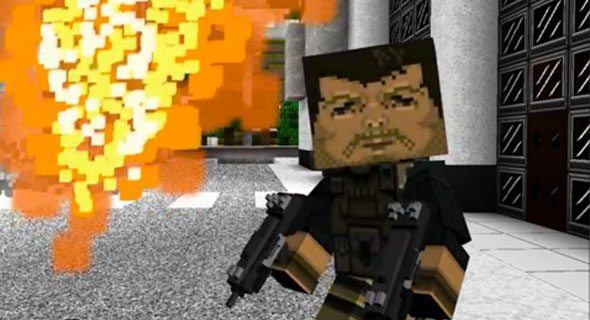 It might look and sound like Guncraft is just Minecraft with guns, but it isn’t. I promise. What Guncraft is, is a unique little first person shooter that looks somewhat similar to Mojang’s title, but only in its aesthetic.  Guncraft focuses on its online multiplayer, with a great emphasis on its voxel based destruction, and the ability to create your own skins, guns, levels, and textures, and take them online against the world, on a peer to peer, hosted, or official server.

The standard game modes for a multiplayer shooter are in stock, complimented by Guncraft’s inventive original game modes.  You’ve got your mainstays like Capture the Flag, Deathmatch, and Team Deathmatch.  There’s a racing mode which puts players in vehicles, and there’s a bunch of really creative and wholly original modes like survival modes in which players must avoid falling meteors or falling floor tiles to stay alive.  Guncraft also allows players to free build, which means exactly as it sounds, and where there is some likeness to Minecraft.  The free build mode allows players to build to their heart’s desire, and open up the map for public consumption.   Another mode worth mention is Onslaught, which the devs themselves coined as their version of Horde mode. And it’s pretty good.

The theme of the mode is the Robopoaclypse, with robot spiders, soldiers, and Star Wars style ships taking on players in tanks, on foot, on gun bikes, and in helicopters. What really makes this shine is what makes the rest of this game so special; the variety of the maps. You’ll be fighting hordes in underwater cities in one game, then out of a football stadium in another.

Killstreaks are here too, in all their glory, with the first killstreak, Predator Mode, looking like hax in comparison to most shooters, with a Terminator style filter highlighting enemies visually across the map, through walls and all. Jetpacks are in their too, as well as the aptly named AC-1337 gunship as the 12th and final killstreak.

The other running theme is creativity, which is available in buckets

The other running theme is creativity, which is available in buckets outside of experiencing other creations.

There’s Gunsmithing; which whilst initially a tad confusing, it is ultimately as straightforward as an editor could be, with a flying block creation mechanic as it’s backbone. You get 100 stat points, and add them to a variety of  pre-defined attributes. This should breed a completely unbalanced game, but it never seems to be that way in-game, seldom ending in players calling hax mid game, and giving complete freedom in what you want to shoot with. There’s also Skin editing. This is a standard PNG based affair, with a skin and stencil image used together on player models. The level editing is great. Once you get into it, you can scale ‘brushes’, which are stacks of blocks, generate extra terrain on the fly, change ambient noise, skyboxes, place  game markers, and generally do what you will with the environment.

There are really some interesting ways to get creative in Guncraft. The final addition to the things you can make are prefabs. You can create an object, of any shape, and any size, and should you have enough currency in-game, you can drop in a bunker. A bridge. A fort. A mounted gun. Pretty much anything. Great, when you’re not the one who’s suddenly confronted with a literal brick wall.

Hosting a game is a straightforward affair too, where you can get up and running as a peer to peer server within seconds, choosing from others maps, or your own.

There are a few drawbacks to this ridiculously fun shooter though.

Despite being up on Steam after a successful Greenlight campaign, and long beta phase, the game frequently crashes, and the lack of a visible server queue can make joining populated servers a needless chore.

The devs, to their merit, are very in touch with the community via Twitter and forums (both Steam and official forums) and respond as quickly as they can with fixes and updates.

The devs, to their merit, are very in touch with the community.

The game is also in store for a host of community driven DLC installments, with the devs  asking players what they want to see in the game.

Anyone can jump in and play, even console gamers; plug in a 360 controller, and it’s fully supported from the off. The controls are standard, on both PC and the gamepad, and the game is accessible in its design.

But when it gets to the crafting, there’s a real lack of tooltips, and no real tutorial. Of course, in the age of the internet, Shift+Tab and a quick web search will find the answers you need, but when it comes to things like skinning new characters, which takes some practice to newcomers, the UI is at a loss on explaining how to do anything.

On the whole, it’s a mad, riotous game, which isn’t ruined by its flaws. It’s accessible, and you can play for 10 minutes as easily as a few hours. Leveling doesn’t come into it; you’re all equal from the off, and it resets each match. Individuality and skill are all that differ, there are no unlocks, just guns crafted by yourself or others to change what happens across ever evolving player made maps.