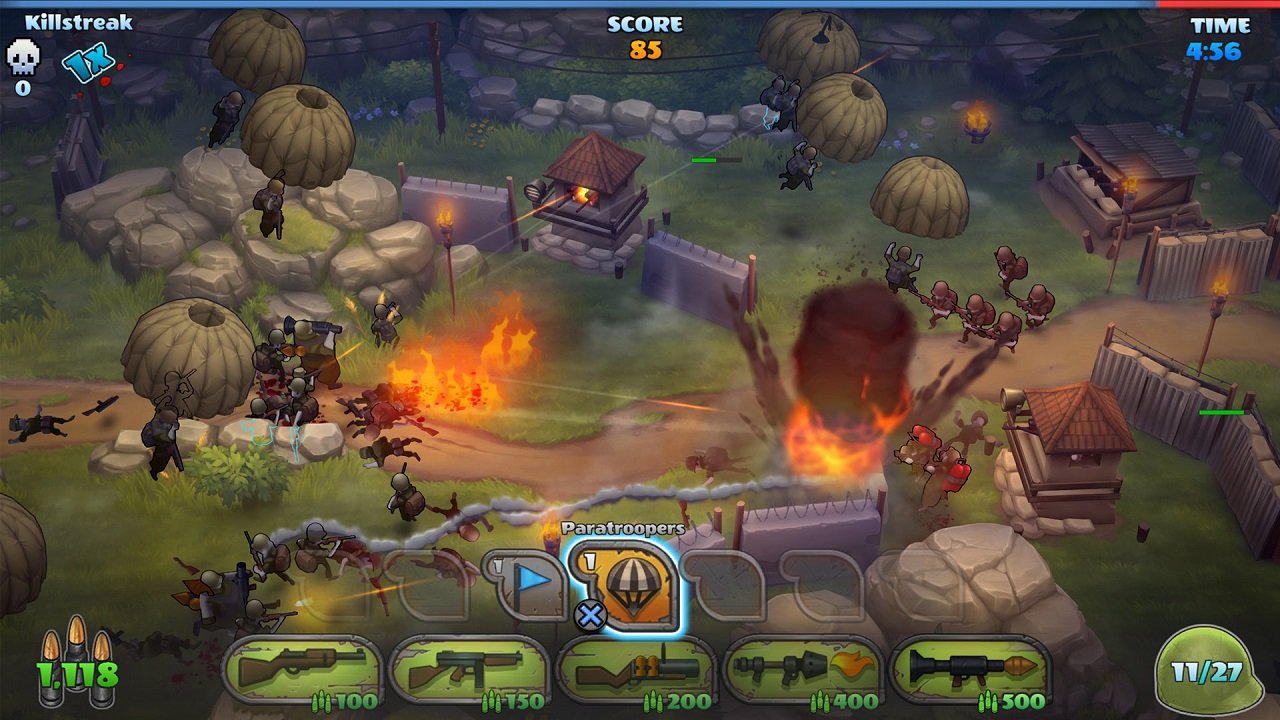 Side-scrolling strategy games have been enjoying a rebirth over the past few years thanks to the mobile gaming market, with base defense/base invasion games getting lots of attention. There’s something that is infinitely rewarding about constructing your own base to fend off an incoming army, or even gathering up your troops to storm through the enemy’s territory and obliterate theirs. Valkyrie Entertainment’s Guns Up! aims to take the best of both types and create a hybrid experience for PlayStation 4, and they came up with a solid game in the process.

The premise for Guns Up! is very simple, as you’re an army general and must manage your resources to gradually construct a powerful base for your troops to defend from attacks and also send your troops out to attack enemy bases. You start off with only a few different kinds of troops like grunts, assault and grenade launchers, but as you complete battles you will level up and unlock more powerful troops like snipers and rocketeers. You’ll be spending the down time in between battles to improve your base, as you’ll place things like tents that spawn more troops, sniper towers, walls and more to fend off the onslaught of enemies that will suddenly attack in waves at certain points.

The game’s visual style is charmingly simplistic, as the colorful and cartoony aesthetic is something that I enjoyed a lot. There isn’t a whole lot of scenery to admire in this game with there currently only being one wooded area to play in, but the fact that your troops are these goofy little blobs wielding big guns consistently put a smile on my face. The game runs pretty well throughout any average firefight, though brief slowdowns will happen when the opposing teams fill up on both sides. The loading screens could be sanded down a little, as well, as even though they aren’t very long they pop up enough to be noticeable. 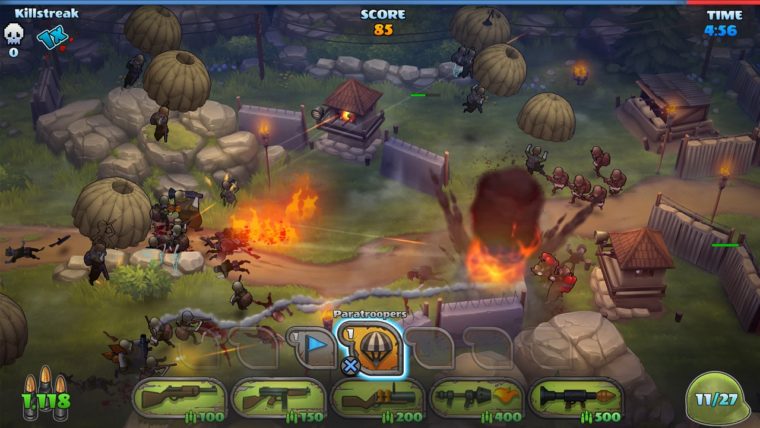 While the fact that the game has only one area to play in is a little disappointing, you can keep expanding the reach of your zone and the amount of offensive or defensive objects you can place on the field by upgrading your base. This allows you to come up with a lot of unique pathways and traps to catch the enemy team in, which keeps the battles in the area from getting monotonous. The obstacles that are naturally in the area like rocks and trees can be used strategically with your construction to block enemies, or you can blow them up with dynamite to put something else there instead. You are limited by how much you can put on the field by build points, though your limit will regularly increase by leveling up.

The first of the two modes that the game offers is called Player vs Player, which has you storming the base of a real life player in asynchronous gameplay. You start off with nothing but a transport truck that slowly moves towards the enemy base, though you use the set amount of munitions you have for each battle to send out your various troops from the truck. The more powerful the troop the more munitions needed to spend, so there is definitely some strategy required to ensure that you don’t run out of munitions too early in the battle. However, doing well and taking out enemy troops will get you back small amounts of munitions to deploy a few more groups of troops as the battle wages on.

The amount of customization that this game offers is great for this type of game, as you can add various perks to all of your troops for improving things like their max health, weapon accuracy and deployment costs. Acquiring 3 of a similar type of perk card allows you to combine them, giving you an even more powerful perk to equip to whichever troop you want. Your troops also have their own individual challenges for you to complete that ask you to do things like win battles with only one type of troop or destroy a certain amount of enemy bunkers, which will give them additional stat boosts. On top of all this, your troops can be ranked up to increase the amount of perk slots they have by gaining valor points, which you’ll win occasionally through regular play. 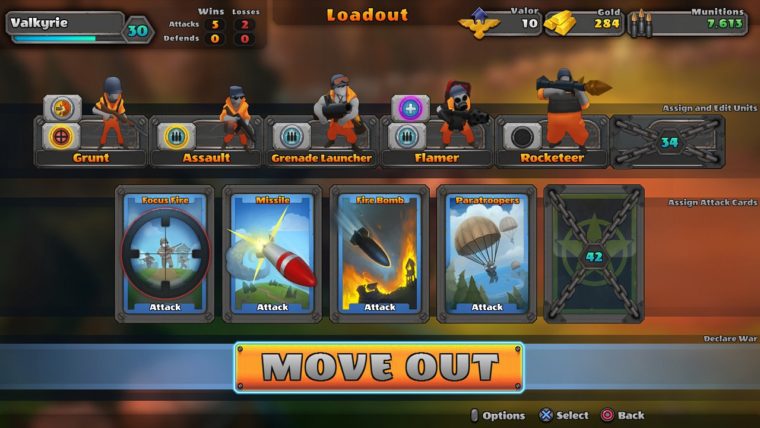 While most of the action that takes place on screen will be automatically carried out by your troops and the enemy team, you do have a bit of control thanks to attack cards via the specials menu. These cards allow you to do things like release tear gas to stun some enemies briefly, prop up a decoy to draw fire away from your troops or even unleash a missile barrage to quickly take out a hoard of enemies. These attack cards are a definite highlight of the battles, as using them wisely and at the right time can turn the tide of the battle in your favor and result in some truly epic war moments.

A game of Player vs Player starts by choosing from a list of players online to challenge in the War menu, and the game will give you a difficulty rating for each opponent. The higher the difficulty the higher the reward is if you succeed, though the slight increase in rewards isn’t high enough to justify the sometimes huge leaps in difficulty that some of these more challenging battles end up delivering. Seeing as these battles are asynchronous, you will regularly receive messages saying that your base was attacked by another player and you are given the option to retaliate. It’s a great feeling to see that your base was wrecked by a formidable opponent and then retaliate and do the same right back to them. It’s a fun system that spices up the gameplay and makes it feel more competitive, despite the fact that you aren’t battling each other in a live setting.

The second of the two modes is called CPU Defense, which is essentially a survival mode where you have to hold off an endless amount of enemy troops for as long as you can. The strength of your troops and your base both come into play here, but what’s most crucial about this mode is your ability to come up with well-designed paths to cramp in or disperse your enemies. You can set up a winding hallway of sorts with armored walls to force your enemies to bunch together, and then laugh at them when they’ve stepped on the landmines you’ve graciously placed for them inside. There’s plenty of room for creativity here, which makes this mode lots of fun to play no matter how many times you’ve given it a go. 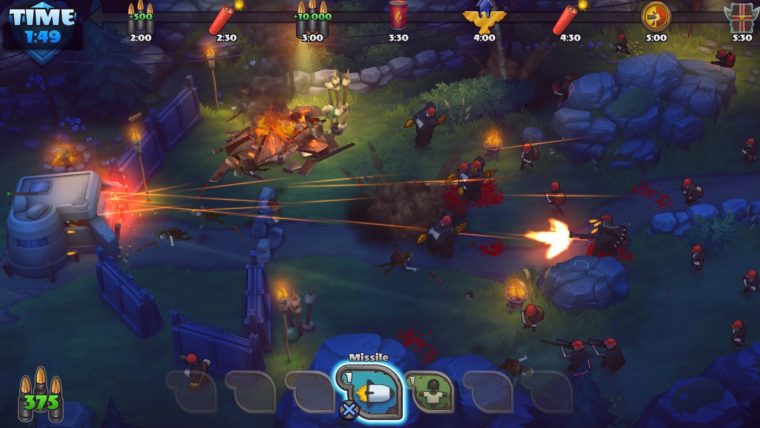 It’s hard to last for more than a handful of minutes in this mode at first, as the game will quickly start sending out snipers, machine gunners and those dreaded rocketeers to end things pretty quickly. Your defenses will hold off the initial opposing forces just fine, but eventually your look of hope will turn into tears of despair as those jerk rocketeers come barreling down the path in droves and decimate all of your hard work in a matter of seconds. It’s a humbling sight to behold, to say the least.

Of course, none of the troops or armaments come free, as you have to pay for it all with the aforementioned currency of the game called munitions. Gaining more munitions isn’t too big of a task as you can get more pretty easily by completing battles and doing well enough that you get 3 stars for the highest payout in each battle. Doing this will give you enough to gradually improve your base and recruit more troops to take on tougher opponents and last just a bit longer in the CPU Defense mode… at first. It definitely gets grindy towards the second half of the progression system, as the upgrade costs go up while the rate at which you gain munitions stays relatively the same. For those who want to move up the ladder fast, that means you’re going to have to play many battles in a row to see any real improvement in the higher levels.

Now, this could be the moment where the game’s free-to-play model rears its ugly head for some, but thankfully Valkyrie Entertainment is fair with the model. Guns Up!, like many games of this kind, has gold in addition to the in-game currency that you can buy with real life money. However, the gold in the game is primarily used for cosmetic improvements, such as customizing your base’s banners, switching up your troops’ hats and uniforms, and placing funny decorations like gnomes around your base. There are places where you can use gold for bigger card packs, stat boosts and bundles to make things a little easier on yourself, but they never felt necessary to me. Pretty much everything else vital to the gameplay that can be purchased with gold can also be purchased with munitions, and there’s no energy mechanic like in some free-to-play games that blocks you from playing for certain chunks of time. 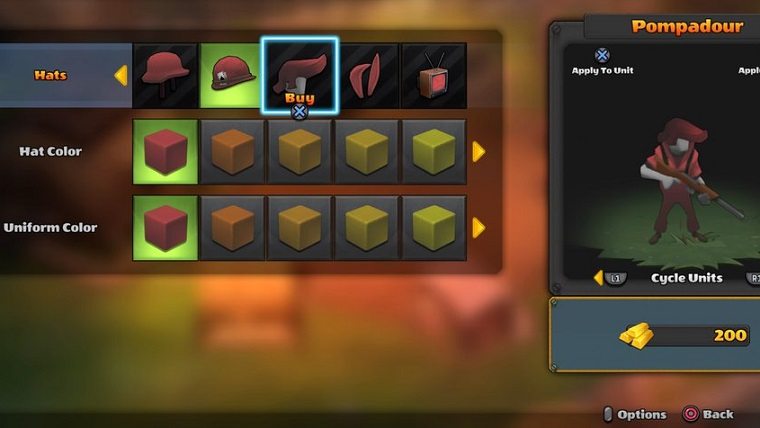 Guns Up! up does the free-to-play model right and offers an engaging and rewarding side-scrolling strategy experience for PlayStation 4. Crafting and gradually expanding your perfect base to hold off your enemies is very addicting, and bulking up your troops to take on tougher and tougher opponents is equally entertaining. While the base and troop progression gets grindy in the latter half and some additional maps and modes would be nice, I’ve been playing for many hours and am still having fun with what the game offers.

If you’re into base defense/base invasion games then you should give Valkyrie Entertainment’s Guns Up! a shot. The game’s free-to-play model is fair and there are plenty of reasons to keep coming back for more and more action-packed warfare, as long as you pace yourself.